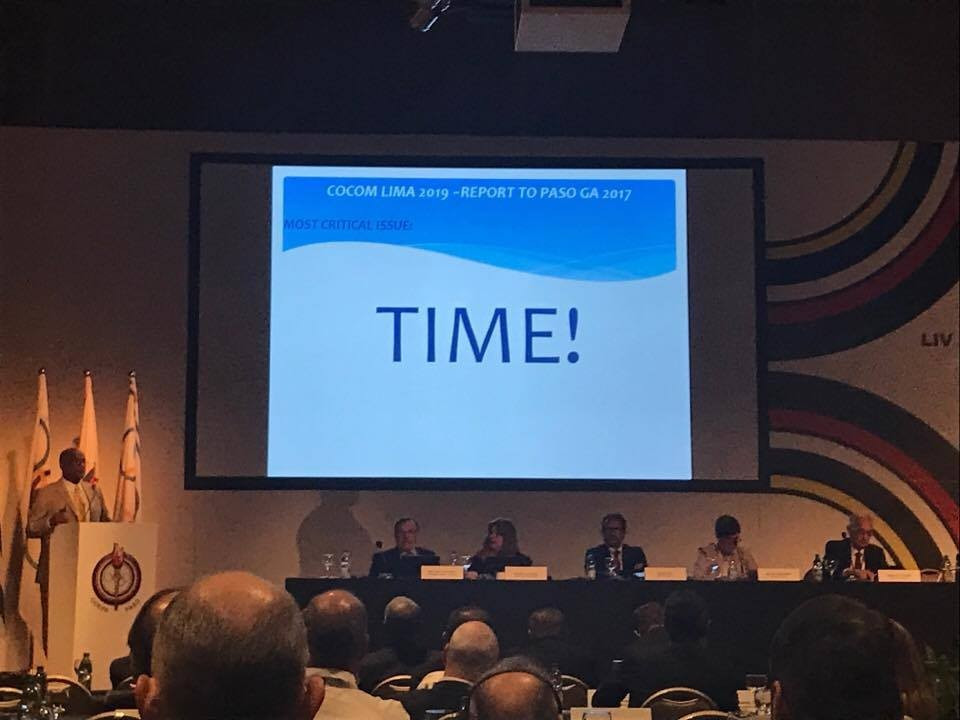 Construction progress at the Athletes' Village and other key venues are among several problems at Lima 2019 raised by the Pan American Sports Organization (PASO) here today.

A strongly worded presentation by PASO Coordination Commission chairman Keith Joseph also raised concerns over poor leadership from organisers and a lack of individuals clearly responsible for key areas, including marketing and technology.

They are very concerned that with only two years to go there is not a single agreement or contract in place with any sponsor.

The low number of sports proposed to be broadcast is another concern, along with a breakdown in relations between the Peruvian Olympic Committee (COP) and the Government.

PASO are also yet to be convinced by the agreement signed last week between the British and Peruvian Governments to make the United Kingdom the main delivery partner of the continental-wide event.

This is because it is "not yet clear what this agreement includes" and whether it will "match PASO's requirements for the proper delivery of the Games".

The most important problem, however, is a lack of time.

"The experience of the NOC and the expertise garnered by many who, over the years, worked with the NOC in the organisation and delivery of several multi-sport Games and at South American and Bolivarian levels, as well as IOC events, does not appear to be brought to bear on the existing efforts at preparing for a successful edition of the Pan American Games in 2019," Joseph said.

"Time is not on our side and, two years out, we have cause for concern.

"We have to deliver in time the appropriate framework and qualities of facilities for a good edition of the Games."

The St Vincent and the Grenadines official did point out that PASO have faced similar problems before other editions of the Pan American Games and always ensured a successful event.

He emphasised that plenty of hard work remains.

There are particular concerns over the Athletes’ Village, with a very tight timeline of 14 months having been defined for construction to be carried out.

The Aquatics Stadium, the athletics stadium at La Videna and the San Isidro Gymnastics Complex are other venues identified as having problems.

PASO has called on Lima 2019 to come up with "Plan B" solutions in the "unlikely event a venue will not be completed on time".

"If we don’t get there in time, there will be no Pan American Games."

It is expected that a PASO Coordination Commission delegation will be urgently dispatched to the Peruvian capital over the next few weeks to oversee the latest progress.

It was also officially announced today that women's baseball was being removed from the programme due to the lack of interest in the event in Peru.

Women's baseball was added for the first time at the Toronto Games in 2015.

The PASO Coordination Commission also claimed to be "shocked" that only 12 sports will be be broadcast live.

They have now received a promise that others - baseball, cycling, diving, handball and women's football - will also be streamed while archery, hockey, and racquetball are also being considered for similar coverage.

"We don't know who is responsible for different areas," he said.

A medical director is also yet to be appointed.

Lima 2019 President Carlos Neuhaus provided reassurances that many of these problems would be resolved.

He also promised that they will not "cross our arms and let them work" following the agreement with the UK Government.

The agreement also does not mean that British companies will necessarily get contracts and it is expected that those from Peru, as well as other countries, will be considered.

Coordination and Technical Committee reports on Pan Am Games in Lima in 2019 very worrying. Running out of time, but no questions from floor

Another problem concerns the payment of $3.3 million (£2.5 million/€3 million) still owed as payment for rights fees by Peru to PASO.

They have been unable to persuade the Government to pay them again.

COP President and PASO Executive Committee member Jose Quiñones has been banned by Peru's sports court from holding any public post for five years because of alleged irregularities in accounts he controlled, but has insisted he has done nothing wrong and is the victim of a politically-driven attack.

A final deadline of December 2018 has been given for the money to be received.