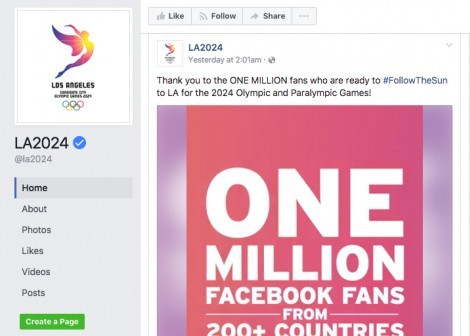 Los Angeles 2024 has denied allegations it used the services of fringe internet companies to artificially increase the number of likes on its Facebook page and followers on Twitter.

They had announced yesterday it had become the first-ever city bidding for the Olympic and Paralympic Games to attract more than a million fans on Facebook.

This came on the back of a sudden surge over the past three months, however, with the Los Angeles 2024 page gaining more than 800,000 likes in that period of time.

According to French newspaper Le Figaro, a team of digital experts found that the majority of those likes came from Africa and the Middle East.

French radio station RTL claimed there is no doubt that Los Angeles 2024 bought the fans, but in a statement sent to insidethegames, the Bidding Committee denied the accusations.

"LA, as a hub of global storytelling and technology, speaks to the world’s youth every day, and LA 2024 has shared exciting content about our bid with a young audience around the world,” it said.

"Bids advertise on traditional and social media, and all Facebook advertising has been purchased directly on Facebook.

"Facebook advertising is more efficient in countries where there is less competition from other brands."

The situation was similar on the Twitter account of Los Angeles 2024, with more than 27,000 followers added last month.

Despite the sharp rise, engagement remained approximately the same between January and April.

The Bid’s chairman Casey Wasserman is the chief executive of the Wasserman Media Group, which owns Laundry Service.

But Los Angeles 2024 said it was their "in-house social media team" which were behind the campaign to help attract more fans to their Facebook page.

With 79 per cent of LA 2024 fan base on Facebook under the age of 34, bid leaders hailed the social media engagement as a reflection of its creative, high-tech offering designed to grow exposure and engagement with young people worldwide, a key part of their presentation at the SportAccord Convention here today.

Los Angeles 2024 said its reach on Facebook has been global, attracting fans from more than 200 nations around the world.

The announcement on breaking the one-million-fans barrier came at the same time as the launch of a mobile app by 2024 bid rivals Paris, aimed at encouraging the French public to get active.

To do so, users must complete fitness challenges, including walking five kilometres, to then unlock new levels.

"Paris 2024 is a passion project bringing together the French people behind the idea that sport must sit at the heart of society," Tony Estanguet, Paris 2024’s co-chairman, said.

"The Objectif Paris 2024 app is a perfect illustration of this."

Earlier this year, it was claimed by French officials that the #Paris2024 hashtag achieved 328 million impressions worldwide between February 1 and 7 - more than five times the population of France and 20 million greater than the population of the United States.