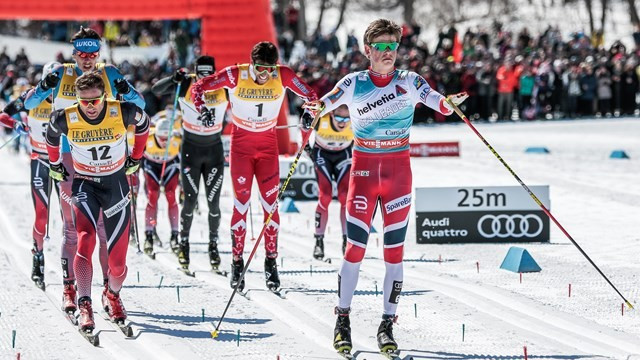 Klaebo overtook teammate Niklas Dyrhaugi in the dying stages of the race to claim victory in the 15 kilometres mass start competition in a time of 35min 23.7sec.

He has a 22.8 second advantage over Dyrhaug.

Alex Harvey of Canada sits third in the standings and will start tomorrow's pursuit just 0.5 seconds adrift of second position.

"The plan was to ski in the front to get as many bonus seconds as possible," said Klaebo.

"Forty-two seconds are important for the overall position.

"It will be a tough battle tomorrow."

Marit Bjoergen of Norway continued her unbeaten streak in distance races this season.

In third place was Finland's Krista Parmakoski, who overcame an early crash in the competition to finish in 24:26.5.

Weng now leads the Quebec mini tour by just one second in front of Bjoergen, heading into tomorrow's final stage and final World Cup competition of the season.

Weng now has 1,780 points to her name, giving her an unassailable 325-point lead over Parmakoski.

Action is due to conclude in Quebec City tomorrow with the women's 10km pursuit and men's 15km pursuit races.