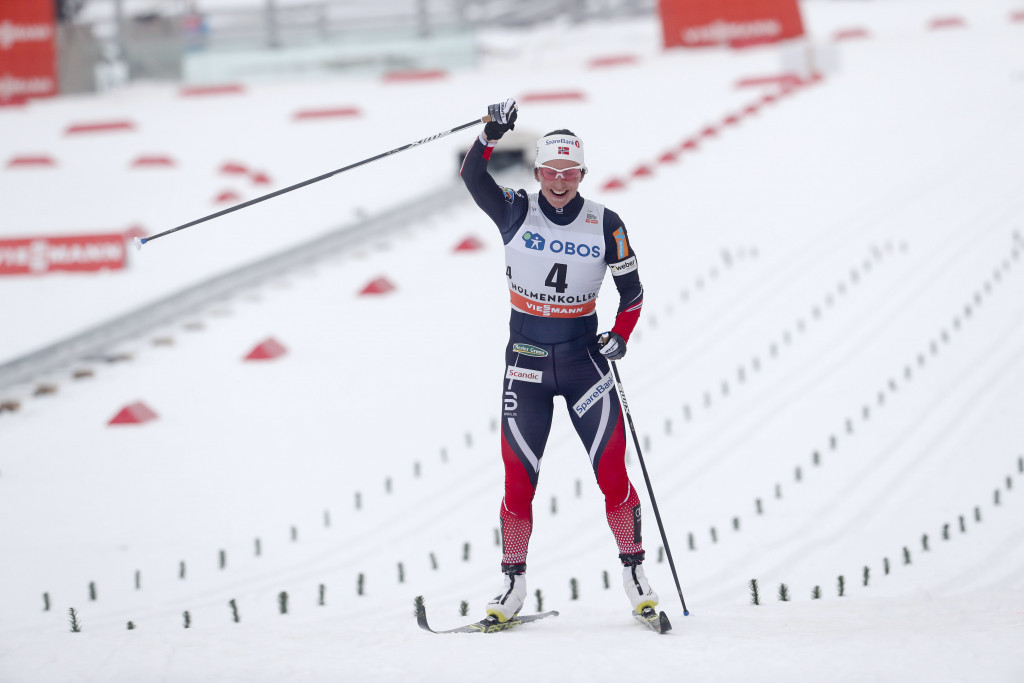 The 36-year-old six-time Olympic champion won the famous Hokmenkollen race for the sixth time, a week after winning over the distance at the World Championships in Lahti.

It was also a notable day for another Norwegian as Heidi Weng moved to the brink of the overall World Cup title with a fourth place finish.

Bjoergen, who won four world titles in Lahti, was a clear winner and had a 20 second lead by the five kilometre mark.

She never looked back and clocked a winning time of 1 hour 22min 59.2sec.

Two Finns followed behind with Krista Parmakoski finishing 2:05.8 back for silver and Kerttu Niskanen ending 2:07.0 adrift for bronze.

Two skiers from Finland had not shared a World Cup podium since 2009.

"I was more relaxed today than in Lahti," said Bjoergen.

"It was a different morning.

"I woke up with my son today and played with him.

"My plan was always to go fast from the beginning if my body felt good and it did.

"I kept pushing the whole race even though I had an early lead but I did look for my son as I was coming to the finish but I didn’t see him.

"I was tired after Lahti and my motivation wasn’t so high.

"It was nice to just be at home with my son.

"But it’s Holmenkollen and it’s easy to get motivated for."

In the overall World Cup standings Weng is almost certain of victory as she has a 300 point lead with a maximum of 300 left available.

The distance World Cup winner has 1,746 points with Krista Parmakoski of Finland second on 1,446.

The final three races of the season will be at the World Cup Final in Quebec City, beginning on March 17 with sprint competition.