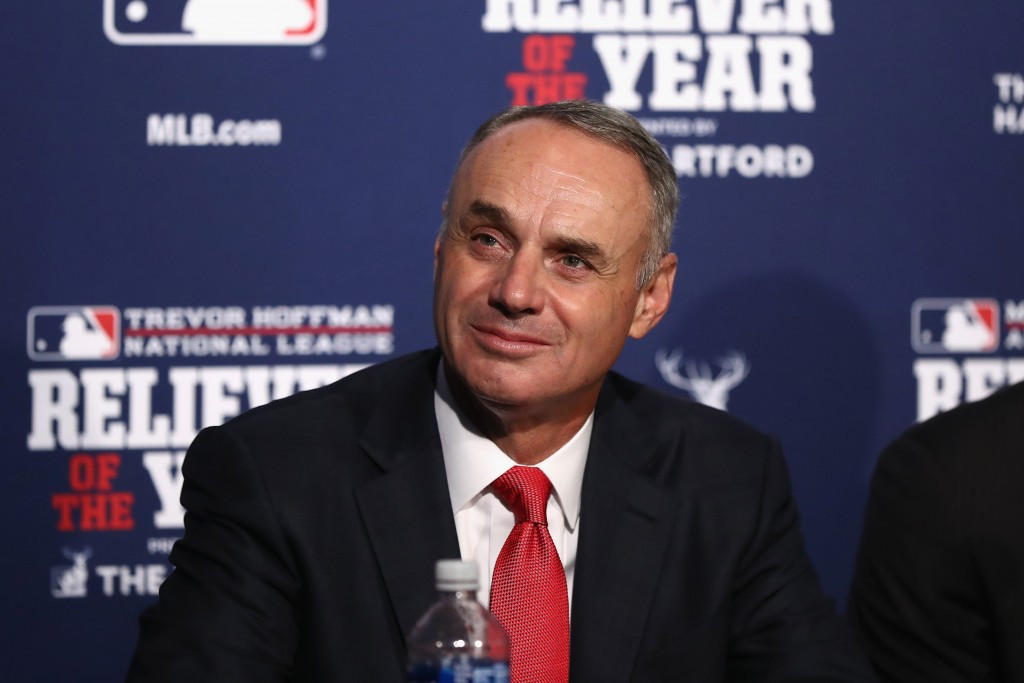 Major League Baseball (MLB) Commissioner Rob Manfred has raised doubts over whether players from the world's top league will compete at the Tokyo 2020 Olympic Games, claiming he does not believe owners would support a break in the season.

The Tokyo 2020 Olympics is due to be held from July 24 to August 9, falling in the middle of the baseball season which runs from April to October.

"No matter how you put the event together there would be a significant amount of major league players who would be away from their teams," Manfred was quoted as saying by The Japan Times.

"It would alter the competition in our everyday game.

"I do not believe our owners would support some sort of a break in our season.

"Continuity is really important to our competition."

Manfred claimed there have not been any "substantive discussions" with the World Baseball Softball Confederation (WBSC) about the participation of MLB players, but added he is "sure that those conversations will take place".

"We have not even been informed about what exactly the format of the event is going to be, how many days would be involved and whatnot," he said.

"I am more than prepared to hear what the event is going to look like, describe to our owners what our options are with respect to participation in that type of event, and we’ll make a decision from there."

WBSC President Riccardo Fraccari has previously claimed he is confident the stars of the MLB, the world's most lucrative baseball league, would play at Tokyo 2020.

The participation of MLB players was part of the proposal made by the WBSC for inclusion at the Games in the Japanese capital.

Baseball and softball was re-added to the Tokyo 2020 programme at the International Olympic Committee (IOC) Session prior to last year's Games in Rio de Janeiro.

The addition of karate, sport climbing, skateboarding and surfing was also confirmed.

Baseball has not featured on the Olympic programme since Beijing 2008, where South Korea beat Cuba in the final.

The Yokohama Stadium is set to be the main competition venue for baseball/softball at Tokyo 2020.

Tokyo 2020 and the IOC appeared to have closed the door on a second Olympic baseball and softball venue in the city's metropolitan area in December.

An additional venue in the Fukushima Prefecture is still being considered, after the prospect was mooted as a way to revitalise an area devastated by a 2011 earthquake and resulting tsunami which left 16,000 dead.

When contacted by insidethegames regarding Manfred's comments, a WSBC spokesperson confirmed "the format and other technical details have not been finalised".

"There is also the staging of a game in Fukushima to consider - to see if that is realistic - to see if that’s possible or not without long travel days negatively affecting the athletes or lengthening the tournament," the spokesperson added.

"WBSC’s 2020 bid was to keep Olympic baseball as compact as possible - reducing it from two weeks in past Games to five or six days - to facilitate player availability.

"WBSC is in discussions with Tokyo 2020 and awaiting confirmation of the final proposed venue plan for Olympic baseball and softball events, and this will shape the format and length of the tournament.

"All our sport’s stakeholders and professional leagues are awaiting the confirmation of these key details because they share the Olympic vision.

"WBSC is both optimistic and determined to ensure that baseball/softball at the Tokyo 2020 Games is a full success and engages audiences in Japan and globally as intended by Agenda 2020."

Ice Hockey is facing a similar issue before the Pyeongchang 2018 Winter Olympics.

Discussions on the participation of National Hockey League players are continuing.