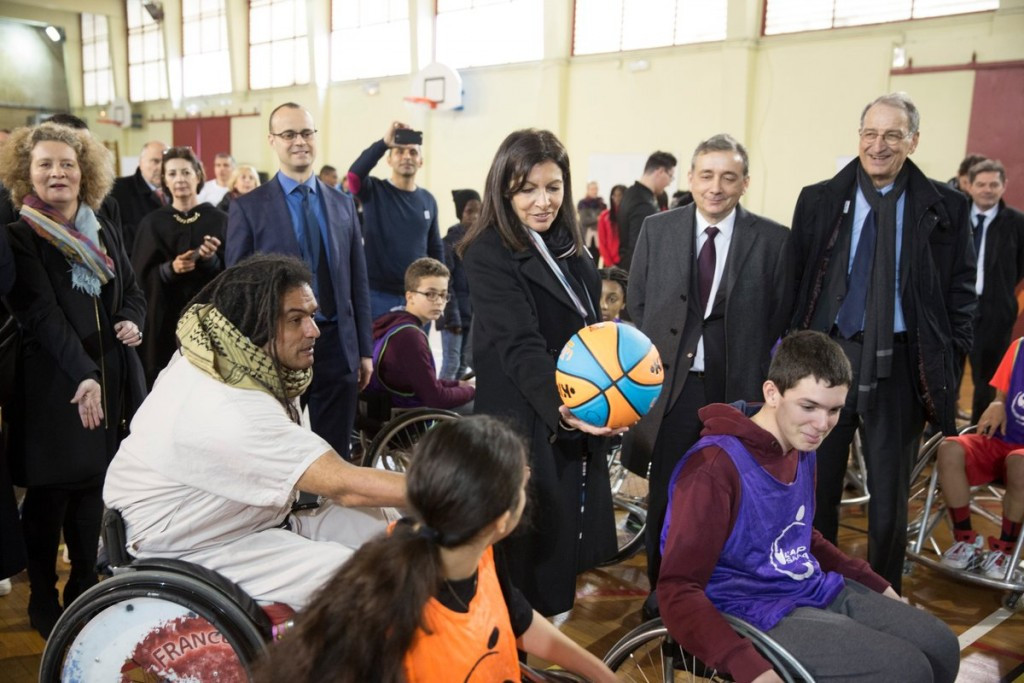 A new initiative aimed at encouraging sports participation among young students from Paris has been launched in line with the French capital’s legacy plans for the 2024 Olympic and Paralympic Games.

It is hoped the initiative, launched by the City of Paris, the Paris Academy and the French National Olympic and Sports Committee (CNOSF), will promote passion for sport and the purpose of Olympism to up to 275,000 Parisian students.

Ten measures have been unveiled to encourage the practice of sport, all of which are due to be implemented from this year onwards by the City of Paris, the Paris Academy and the CNOSF.

"This initiative is a further demonstration of the importance we place on the Olympic and Paralympic Games," Paris Mayor Anne Hidalgo said from François Villon high school in central Paris, where the programme was launched.

"We want the Games to benefit Parisians and the entire French population, leaving a strong legacy for young people and future generations to have positive Olympic values embedded into their daily lives.

"I welcome the action of the Ministry of Education, which is committed to joining the City of Paris and the sporting world in this ambition."

Among the 10 measures that are to due to be implemented is the sharing and development of resources for the promotion of the values of Olympism and the development of sporting practice among the school community and young people in Paris.

There is also an intention to expand access to schools and educational courses for young athletes, with flexible schedules that allow them to reconcile their studies and their training, and to develop meetings between Olympic and Paralympic athletes and the school and university community.

The latter includes a focus on women's sport and access to less commonly practised sports.

Other plans include strengthening partnerships between municipal and school sports facilities, aimed at encouraging and facilitating the use of school sports facilities outside school hours, and introducing the history and values of Olympism through the On your marks, get set, Paris! Living the history and values of Olympism programme.

Developed by the League of Education, with support from the CNOSF, the Ministry of Education and the French Paralympic Committee, the programme is set to be broadcast to 15,000 pupils, 614 Parisian fifth grade classes and 150 middle schools in the capital.

"This great initiative by the City of Paris, Paris Academy and the CNOSF will increase the opportunities for young Parisians to get involved in sport," Tony Estanguet, co-chair of Paris 2024, said.

"It is also a great pathway for our Generation 2024 athletes - the "future stars of French sport" - to achieve their goals.

"These measures are a further example of the strong unity that exists between the bid, the city, our NOC and our partners, and our common purpose to deliver a Games that not only benefits the local population but leaves a significant and lasting legacy on future generations."

Included within the additional five measures is the commitment to supporting all initiatives promoted by the educational community on the organisation of sports events, particularly the initiatives in favour of Para-sport, adapted sport, shared sport and women's sport.

Developing a programme of extra-curricular, out-of-school activities for students dedicated to the discovery of Olympic sports and the promotion of Olympic values features on the list as well, along with promoting initiatives in schools that can be used in the context of school sports competitions.

There is also a desire to place sport at the heart of the Paris Participatory Budget, a city initiative that allows Parisians to propose investment projects for their communities, so that children and teenagers can vote to choose the projects that best meet their expectations.

Completing the list is the aim to include sport in international school exchanges by developing interactions and correspondence between Parisian pupils and students from cities that have already hosted the Olympic and Paralympic Games.

"By working in close collaboration with the National Education and the City of Paris we are able to create better access to sport for students while at the same time encourage greater awareness and understanding of the history of the Olympic Movement and the core values that lie at its heart," Denis Masseglia, President of the CNOSF, said.

"Through our bid for the 2024 Olympic and Paralympic Games, we have an incredible opportunity to transform the way young people interact with sport on a daily basis; by taking this philosophy directly into schools we can drive meaningful change more effectively."

The new programme is said to complement the educational initiatives implemented last month by Paris 2024.

"Playdagogie - values of Olympism", developed in collaboration with the United Nations Children's Fund (UNICEF) and PLAY International and based on the established approach of using games and sport to develop life skills, aims to bring the concept of Olympism and integrate the values of friendship, excellence and respect into educational content for children.

Alongside Playdagogie, the "Olympic and Paralympic Week", which will take place every January as part of the national education curriculum, will strive to mobilise more than one million kids in France in its first year.

Paris is locked in a three-way fight for the 2024 Games with Budapest and Los Angeles.

The International Olympic Committee is due to elect its chosen host city at the Session in Lima on September 13.