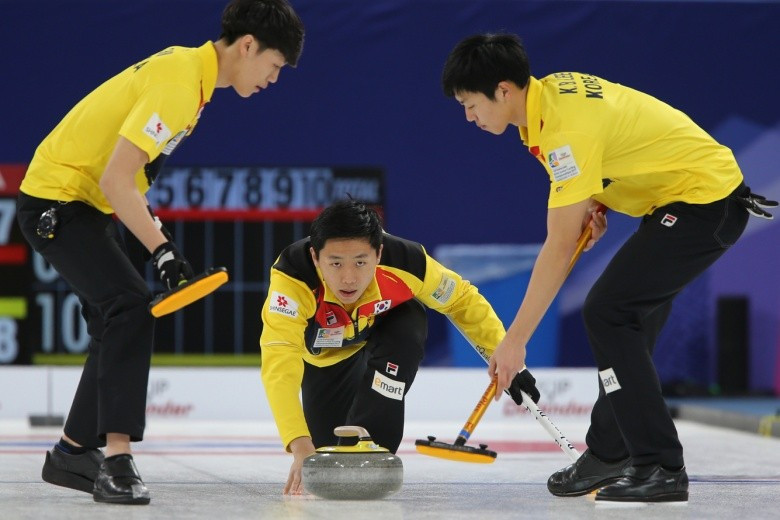 A 7-4 victory over the United States this morning was followed by a 7-3 triumph over Italy this evening to make it five successive wins for the home nation.

"At the moment we are first in the standings, so there is lots of pressure," South Korea’s skip Ki Jeong Lee said.

Norway are now South Korea’s closest challengers in second place after they scored twos in the fourth, sixth and eighth ends on their way to an eight-end 8-2 win over China this evening.

The win in their only appearance of the day at the Gangneung Curling Centre improves their record to four wins and one loss.

The US returned to the ice to face Canada after their loss to South Korea, and in a tight game in which they blanked four ends, they emerged as 6-2 winners.

Both nations are locked together in joint third place in the rankings, with Canada having earlier beaten Italy 9-2.

Scotland and Switzerland played out another closely-fought game in the morning session, and it was the former who emerged with an 8-7 win after they were taken all the way to an extra end.

In the fourth game of the evening session, Sweden beat Turkey 7-5 to earn their first win and leave their opponents still striving to get off the mark.

There was one women’s session today with Scotland losing their unbeaten record after defeat to Switzerland.

The lead changed hands six times in the game, but it was Switzerland who ultimately prevailed as skip Selina Witschonke drew her last stone of the 10th end into the four-foot ring and scored two points to seal an 8-7 win.

"[The game was] so good because we lost the two games we had yesterday and two days ago," Witschonke said.

"I am very happy we could win one game again."

The Scots now find themselves in a three-way tie at the top-of-the-table with Sweden and Canada, both of whom won today.

Canada emerged as 7-4 winners in a close match with South Korea, while Sweden comfortably overcame Turkey 9-2 in eight ends.

In the one other match played today, Russia gained their first victory with a 5-3 success over Hungary, who remain winless.

The win was sealed in the 10th end when Russia skip Maria Baksheeva cleared the sole Hungarian stone in the house with a promote double.

The round-robin stage of the Championships is due to continue tomorrow, with the competition acting as a test event for the Pyeongchang 2018 Winter Olympic Games.