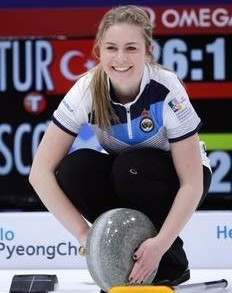 Scotland became the sole leaders in the round robin phase of the women’s competition at the World Junior Curling Championships after recording their third victory at the Gangneung Curling Centre.

Narrow victories over hosts South Korea and Hungary yesterday had given the Scottish team an ideal start to the competition.

The team, led by Sophie Jackson, had only achieved qualification to the event after winning the B-Championships last month.

They would continue their fine start by beating Turkey 10-5 on the second day of action.

“This is a good place to be after two days, so we’re really happy with that,” said Jackson.

“We came in pretty strong today, but it’s quite tricky to hold on to early leads like that sometimes, so I’m really pleased with how we did that.

“We had a few slack shots here and there but we still felt pretty calm and collected.”

Sweden, who won both their matches on the opening day of the Championships, enjoyed a rest day.

Canada joined them on two victories as the defending champions bounced back from a defeat yesterday to beat Switzerland 7-5.

The United States beat Hungary 9-6 to claim their first victory, while Japan edged past Russia 6-5.

South Korea’s men’s team are currently delighting the home crowd, with their team boasting a 100 per cent record from their three matches.

Following a win over Norway on the opening day, they defeated Canada 9-5 in their first clash today.

They would then follow it up with an 8-4 win over Turkey to move clear as the group leaders.

Switzerland are also unbeaten after overcoming Sweden 10-3, but they have only played two matches to date.

Canada and Norway boast two wins and one defeat so far at the Championships, which is acting as a Pyeongchang 2018 test event.