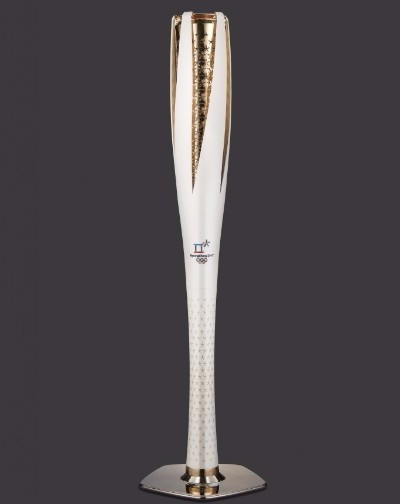 Pyeongchang 2018 are hopeful their Olympic Torch will signify the start of Asia’s Olympic boom, after its unveil here today.

Both the Torch and Torchbearer uniforms were revealed here, with Olympic figure skating champion Yuna Kim and Lillehammer 2016 Youth Olympic cross-country skiing gold medallist Magnus Kim among those taking part in a ceremony.

Following next year’s Games in South Korea, Japan’s capital city Tokyo will host the Summer Olympics in 2020, before Beijing stages the 2022 Winter Olympics.

“I believe the Torch Relay will herald the three consecutive Olympic Games in Asia,” Kim said.

“It will be a flame of harmony to symbolise the passion which connects people and shows the passion of Korean people which will connect people around the world.

“The five flames will join together to represent the unity.

The torch is 700 millimetres high, with organisers claiming it represents the altitude of Pyeonchang, which is 700 meters above sea level.

Pyeongchang 2018 state the flame will have five prongs to form the symbol of the city, with the five-angled shape in the middle of the cap representing the spirit of sports, which connects races, nations, religions, genders, cultures, as well as the five continents around the world.

It is claimed the design will enable one part of the flame to be burning at all times, due to it being sheltered from the South Korea’s strong wind and heavy snow, with an air tunnel also included to provide more oxygen to keep the flame lit.

The torch was designed by South Korean designer Young Se Kim, with those used in the relay set to be produced by the Hanwha Corporation, who also produced the Seoul 1988 Olympic Torch.

The torchbearer uniform was also produced by a Pyeongchang 2018 partner, with The North Face having combined the colours of the white Torch with the blue, yellow, black, green, and red from the Olympic Rings.

It is claimed the uniform with be comfortable and practical waterproof fabric having been used.

“The Olympic Torch Relay will bring the spotlight to Pyeongchang, sparking passion to connect the world together.”

The Torch is set to be carried by 7,500 torchbearers during the relay, with Coca-Cola, Samsung, and KT set to be presenting partners.