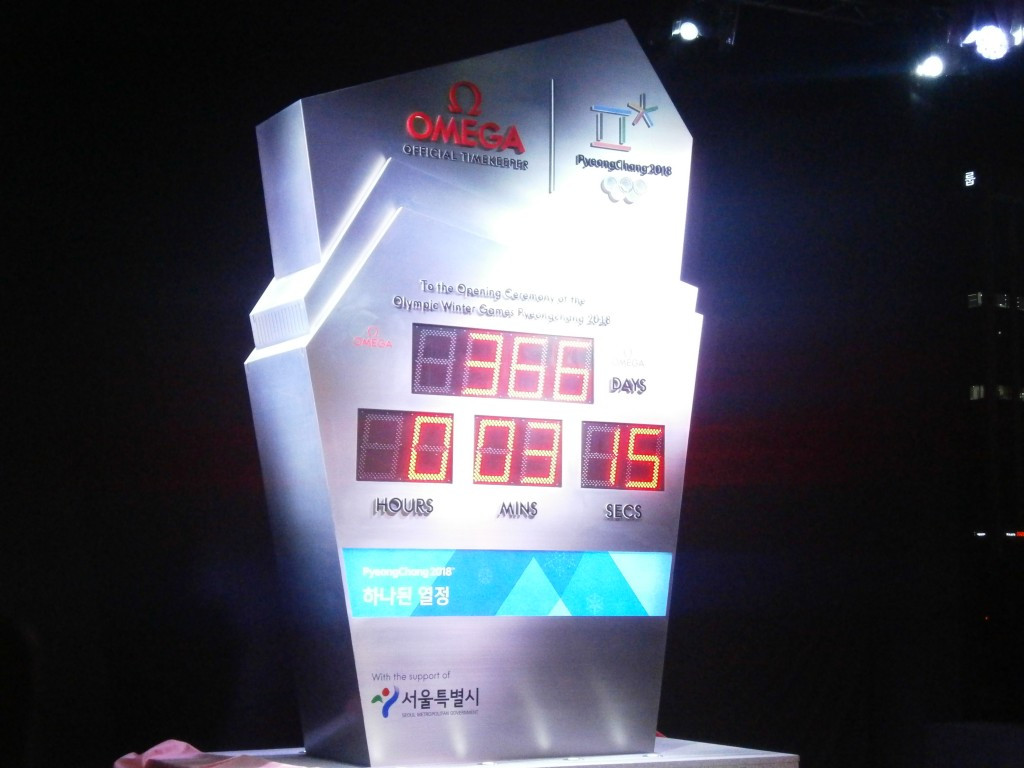 Pyeongchang 2018 have begun the one-year countdown to the Winter Olympics by unveiling an Omega clock in South Korea’s capital city Seoul.

The Swiss watch company, which is a top-tier worldwide sponsor of the Olympic Games as it is a member of The Olympic Partner (TOP) programme, revealed the clock at a special ceremony here today.

International Olympic Committee (IOC) member and chair of the Pyeongchang 2018 Coordination Commission Gunilla Lindberg was among the key figures present at the event.

The clock began with exactly one-year to go until the start of competition at the Games, with curling and ski jumping events scheduled to begin on February 8 next year.

The Opening Ceremony of the Games will then take place on February 9.

“This is a major milestone as the excitement builds to the Olympic Winter Games in Pyeongchang,” said Lindberg.

“It will be a truly great moment in sporting history.

“It marks the final stretch of preparations, there is only one year until the world will witness South Korea’s ability to deliver a fantastic Winter Games in a wonderful venue.

“Next year, it will also mark the 30th anniversary of this great city of Seoul having hosted the Summer Olympic Games.

“The Olympic Winter Games is a truly great event, which inspires people all over the world.

“In one year, Omega will add to its legacy of providing state-of-the-art timing services in the rich history of the Olympic Games.”

The countdown clock is the only one to be revealed for the Games, with site located at the heart of the country’s capital city.

Pyeongchang 2018 has previously been encouraged by the International Olympic Committee (IOC) to boost their national and international promotion of the Games, with the location in Seoul possibly suggesting organisers are responding to these requests by trying to reach residents in the capital.

A troupe of drummers and dancers performed ahead of the event, giving an idea of the kind of culture visitors to South Korea might come to expect next year.

“The Olympic Winter Games Pyeongchang 2018 is being flawlessly prepared to successfully host an event that brings together culture, the economy, the environment, peace and the Olympic Games, to unite people around the world through this great festival,” said Yoo.

“I hope everyone can take full advantage of this opportunity and we can enjoy Pyeongchang 2018 together.”

The official guests at the ceremony were all presented with Omega last-lap bells at the close of the event.

The bells, made by hand in the Swiss mountains, are used to signify the final lap of events in cross-country, biathlon, short track and speed skating events.

Pyeongchang 2018 will mark the 28th time Omega will serve as the official timekeeper since 1932.

"We have been the official timekeeper at the Olympic Games 27 times," said Raynald Aeschlimann, Omega President and chief executive.

"In all those years we have never lost sight of our role, which is to serve the finest athletes in the world, who train so very hard to compete at this level.