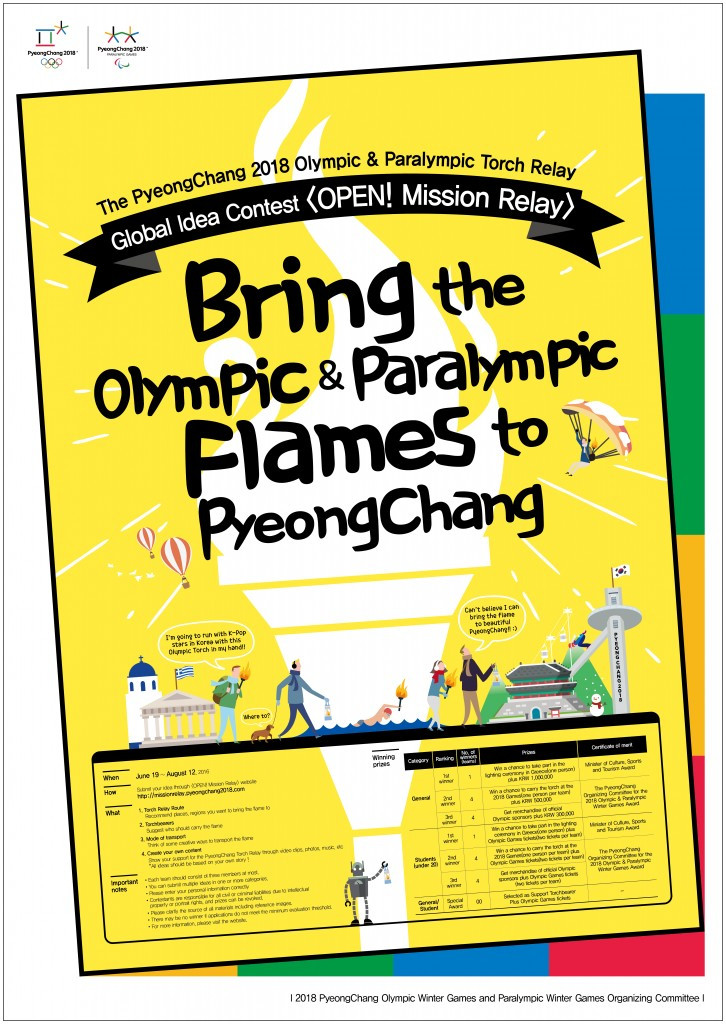 Pyeongchang 2018 has launched a worldwide open contest to find ideas for their Winter Olympic and Paralympic Games Torch Relay.

The Organising Committee, who have today moved into their new headquarters in Pyeongchang, is asking people across the globe to submit entries into the "OPEN! Mission Relay" competition.

It officially began yesterday to coincide with the 600-days-to-go milestone until the first-ever Winter Games to take place in South Korea get underway with the Opening Ceremony on February 9, and will conclude on August 12.

They are asking for ideas in four categories - potential Torch Relay routes, Torchbearers, mode of transportation and creative content in promoting the event.

Applicants are invited to submit places where they think the Torch should visit, how it should be carried and who should be given the honour of running with it during the route.

Those behind the winning concepts, which will be included as part of the Torch Relay planning process, will be given the opportunity to participate in the flame lighting ceremony in Greece.

The second-placed entrants will be offered the chance to be Torchbearers during the route.

Pyeongchang 2018 are describing the open contest as a "new and fresh approach" to the Torch Relay, which is a key event in the build-up to any Olympic Games.

"Pyeongchang's OPEN! Mission Relay is a fresh approach to the iconic Torch Relay, and Pyeongchang 2018 aims to engage the passion of winter sports fans around the world in completing our project," Pyeongchang 2018 President Lee Hee-beom said.

"I look forward to being pleasantly surprised by bright and creative ideas that will make the 2018 Torch Relay even more special."

The news comes as Pyeongchang 2018 officially moved their operation from Seoul to a new building located near the Pyeongchang Olympic Plaza.

They had been operating split offices between the host city and the capital but will now be based in Pyeongchang in a headquarters which spans 10,408 metres squared and can accommodate more than 700 employees.

Construction work on the building began in November 2015 and was recently finished by Serveone, an affiliate company of technology giants LG Group.

Those interested in submitting an entry can do so by clicking here.