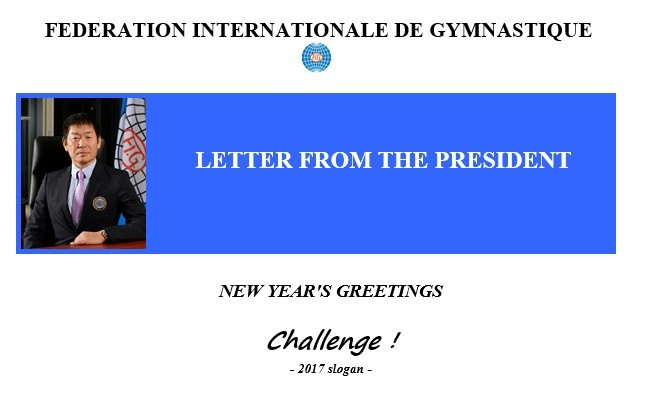 International Gymnastics Federation (FIG) President Morinari Watanabe has used his New Year’s message to urge the Member Federations of the governing body to take up a "challenge" in 2017 to help "form a new FIG".

Japan's Watanabe, who officially begun work as FIG President on Sunday (January 1) as the replacement for Italian Bruno Grandi, unveiled the word "challenge" as his slogan for 2017.

The 57-year-old hopes the FIG’s 148 Member Federations will buy into his ideas to aid the development of the sport worldwide.

Both Watanabe and Grandi admitted their frustration that some statute changes, designed to improve the governance of the organisation, were rejected during the FIG Congress in Tokyo in October.

Grandi, President of FIG since 1996 before making way for the Japanese, fiercely criticised members for not passing changes in an open letter, published in November.

He claimed he was "perplexed" by the "contradictory" results after Congress failed to adopt a series of statutes aimed at removing conflicts of interest.

"I would like to throw new sunshine on the gymnastics family," Watanabe wrote in a letter to members.

"To this end, I would like to propose 'Challenge' as the slogan of the 2017 gymnastics family.

"I am determined to rise to the challenge of forming a new FIG and I would like you to join me in accepting new challenges in 2017.

"Please take on a new challenge that is different from what you did last year.

"There are 148 FIG Member Federations.

"I am sure that those 148 challenges will lead the world gymnastics community to further its development."

Watanabe comprehensively beat challenger Georges Guelzec, the President of the European Union of Gymnastics, to become only the ninth head of FIG since it was established in 1881 at the Congress in the Japanese capital.

Watanabe has targeted improving the status of the organisation within the International Olympic Committee as there is currently no FIG representation on the body, even though gymnastics is a top tier sport along aquatics and athletics.

He also plans to lure Tokyo 2020 sponsors to partner with FIG, and hopes to take gymnastics to the "number one spot" on the list of global sports in front of football.