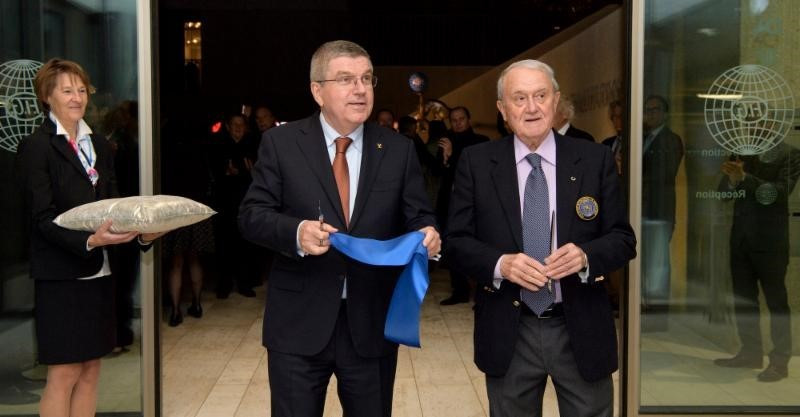 Grandi, who will be officially replaced by Morinari Watanabe of Japan at the end of this year, performed the duty alongside International Olympic Committee (IOC) counterpart, Thomas Bach.

They were joined by members of the IOC Executive Board who are here for their ongoing meeting, as well as city and regional political authorities and representatives from other International Federations.

"After 20 years of Presidency, I have the pleasure of leaving my successor Morinari Watanabe the keys to a solid federation," said Grandi.

"This building is a testament to gymnastics' growing prestige on the international sports scene."

The CHF16.5 million (£13 million/$16.3 million/€15.2 million) four-story building was designed under the direction of architects Richter Dahl Rocha & Associates in the Swiss city.

It has a statue of a "graceful gymnast" at the entrance, designed by artist Eleanor Cardozo.

"You can look ahead to the future of the FIG and gymnastics in the world on a very solid foundation," Bach added.

"I hope that the construction here is a solid foundation.

"But I'm sure that you have a very solid foundation as far as the sport is concerned, and we saw another demonstration of the power of gymnastics at the Olympic Games in Rio."

FIG claims to be the "oldest Olympic IF", having been founded in 1881 in the Belgian city of Liege.

It has also enjoyed stints based in France and Poland before shifting to Switzerland after World War Two.

The body has been based in Lausanne since 2008, taking up residence in a 19th century villa at Avenue de la Gare 12, which it purchased from the city.

The new building, which is said to be larger and more adapted to modern professional needs, is situated in neighbouring lot 12A.

After 26 months of construction, the 30 employees of the Federation were able to move into their new offices at the end of November.