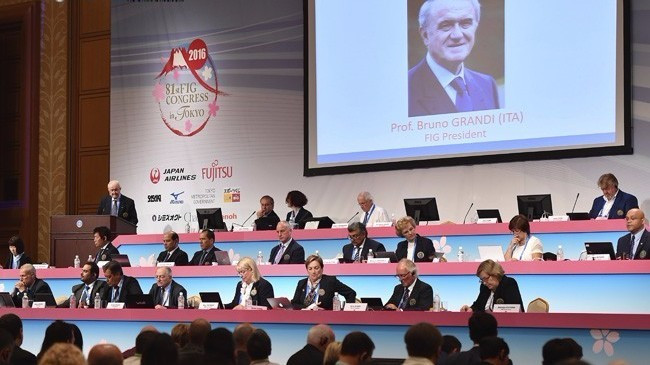 Departing International Gymnastics Federation (FIG) President Bruno Grandi has fiercely criticised the Member Federations of the worldwide governing body for failing to adopt a series of statutes designed to remove conflicts of interest, claiming he was "perplexed" by the "contradictory" results at Congress last month.

In a strongly-worded letter Grandi, due to be replaced as head of the FIG by Japan’s Morinari Watanabe on January 1, accused members of damaging the transparency of the sport and expressed his disappointment that several key measures were not passed at the meeting.

The 81-year-old Italian claims that the current rules in place mean an "air of suspicion" hovers over every major competition held by the FIG.

"We have preferred to maintain intact this system of doubts and suspicions which weighs negatively on our competitions, rather than introduce conditions conducive to greater transparency," he said.

Grandi, leader of the  organisation since he was elected President in 1996, feels some of the members decided not to vote in favour of the proposals he championed, including changing the way Technical Committee Presidents are elected from a Congress vote to a choice of the Executive Committee, for selfish reasons.

He reserved particular criticism for the role of the Technical Committee heads, claiming they are elected "based on political agreements with members" and "not based on their expertise, their experience and their ethico-sportive behaviour".

"The opposite should be happening," he said.

"For example, in a public utility service like a hospital, the general rule is to try to have the best doctors and not the best politicians who practice medicine.

"A third of the delegates did not want to call into question in the statutes the 'non-separation of powers' and preferred to maintain the 'conflicts of interest and conflicts of responsibility' present in our system.

"What that says in brief is that we want to do what serves us and not what is fair."

Grandi claims the fact that the Presidents of the Technical Committees, who vote on rules and regulations for gymnastics events, are on the Executive Committee means they have "absolute power" and believes this is a clear "conflict of responsibility".

The outgoing FIG President claimed this was a particular article in the statutes raised by the International Olympic Committee in its attempt to improve the governance of International Federations as one which "evidently poses legal problems".

"All Federations invest money and develop a strategy to obtain results in competition, but who determines the results in the sport?" he added.

"The judges, with the approval of the members of the technical committees as the superior jury!

"As said already, the Technical Committees are elected politically, and that every four years, they are supported by the technicians and by the judges who were their own students.

"This constitutes a vicious circle of 'position and function' which is defined on a legal level as 'controllers and the controlled'.

"Therein lies the conflict of interest.

"How can one hope to establish justice and fairness in a system in which each act, correct or not, is justified and absolved by itself?"

Grandi goes on to write that this makes for an "absurd" system.

"In this situation there is another more serious consequence, putting into play the behavior of the judges, which we call 'chauvinism', an offensive-defensive reaction to protect the athletes of one’s own country or countries with which they have possibly made agreements with," he said.

Watanabe, who comprehensively beat challenger Georges Guelzec, the President of the European Union of Gymnastics, to become the ninth leader of the FIG since it was established in 1881, also admitted his frustration that some statutes were rejected following the Congress.