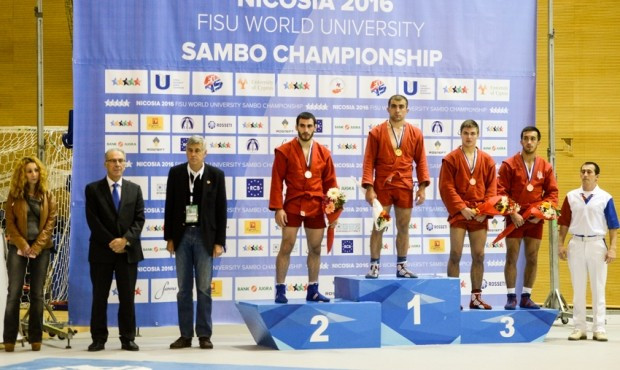 Russia were the dominant force on the first day of the inaugural World University Sambo Championships here, winning all six of the finals in which they were represented.

Victoria Oster then doubled the tally with a 4-0 victory over Ukraine’s Ruslana Stelmashchuk in the women’s 56kg final.

The first of three men’s competition titles for Russia came courtesy of Bislan Nadiukov, who beat Bulgaria’s Ashot Martirosyan in the 74kg gold medal match by virtue of establishing an eight-point lead at 8-0.

An impressive day’s work for the country in which sambo originated was complete when Viktoria Kazurina overcame Belarus’ Yuliya Trakhnevich in the final of the women’s 72kg, a category which featured just two competitors.

France’s Milene Wojciak and Romania’s Ioana Hanas were the bronze medallists in the women’s 48kg, while Lithuania’s Auguste Repeckaite and Romania’s Daniela Poroineanu shared the third step of the women’s 56kg podium.

The two other finals were both won by Ukraine with Yuliia Khramova sealing victory over Romania’s Lavinia Lioveanu in the women’s 64kg with a 20-second hold down and Vasylyna Kyrychenko defeating Belarus’ Katsiaryna Kaliuzhnaya 10-4 in the women’s over 80kg.

Russia’s Evgenia Volkova was the sole bronze medallist in the women’s 64kg, while Russia’s Irina Kharitonova and France’s Eléna Chirac came third in the women’s over 80kg.

Action was also due to take place today in the men’s 52kg category, but Russia’s Andrey Kubarykov was the only sambist registered.

The World University Sambo Championships are set to continue tomorrow, with the men’s 57kg, 68kg, 82kg and 100kg categories taking centre stage along with the women’s 52kg, 60kg, 68kg and 80kg.