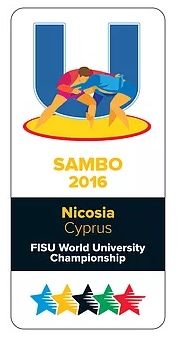 The first-ever World University Sambo Championships are set to begin here in Cyprus tomorrow as athletes battle it out for medals across 10 different men’s and women’s weight categories.

The three-day event, scheduled to be held at the University of Cyprus Sports Centre in Nicosia, is for sambists aged between 17 and 28 who have valid subscription in a university recognised by the International University Sports Federation (FISU).

Countries will compete in teams of seven, made up of four men and three women, with each bout seeing sambists fight for a point towards a winning score of four.

The World University Championships are multiple mono-sport events, the organisation of which is delegated to a National University Sports Federation and then to a city and an Organising Committee.

Organised every even-numbered year, they alternate with the Summer and Winter Universiades.

Sambo made its one and only Summer Universiade appearance at the 2013 edition in Kazan and is currently striving to secure a place on the compulsory sports programme.

In December 2014, the inaugural Sambo University World Cup was held in the Cypriot city of Limassol and served as a test event for the upcoming World University Sambo Championships.

"It is important to mention that 338 World University Championships have been organised under the aegis of FISU since 1962 over the five continents.

"They have featured 42 disciplines and gathered more than 60,000 student-athletes in total.

"I should also thank all Organising Committees of these events.

"Without their energy and enthusiasm and without the support of our member associations these Championships would have been impossible.

"Note also that FISU has benefited greatly from the much valued assistance of many international sports federations with which it maintains close ties."

The International Cheer Union and the International Federation of Muaythai Amateur were accepted on Tuesday (December 6) following a discussion at the IOC Executive Board meeting in Lausanne.

FIAS had been hoping for inclusion after also running a serious campaign.