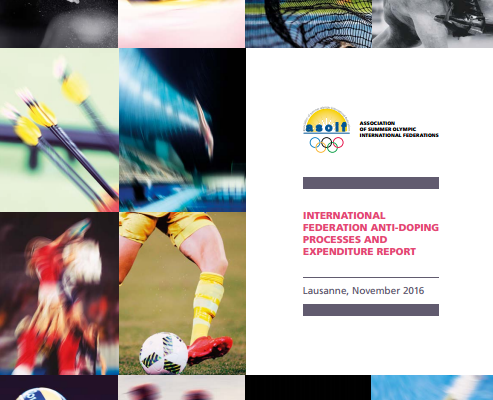 A total of 80 per cent of the total funding spent on anti-doping activities by Summer Olympic International Federations in 2015 was undertaken by just six sporting governing bodies, a report has claimed.

The report, commissioned by the Association of Summer Olympic International Federations (ASOIF), found that the total anti-doping budget amounted to $22.84 million (£18.12 million/€21.04 million) when human resources costs were excluded.

Information was taken from 26 International Federations, meaning it excluded two of the 28 sports that appeared on the programme at Rio 2016.

"It is important to note that there are significant differences in spending between the different IFs," the report concludes.

It is not clear what International Federations are in what group, although insidethegames understands that the International Cycling Union is the largest single contributor.

The report, undertaken by a panel chaired by Canada's International Olympic Committee (IOC) Medical Commission member Margo Mountjoy, found that total expenditure had risen by a relatively small margin of $1.44 million (£1.14 million/€1.32 million) since their last report in 2009.

It is also claimed that there has been a "significant increase" from seven to 11 per cent of the total costs of anti-doping between 2009 and 2015 for the 17 "Group 1" sports.

This comes as sporting bodies attempt to reform the anti-doping system in order to take testing out of the hands of the International Fedeartions and into an "independent body", probably connected to the World Anti-Doping Agency (WADA).

A WADA Independent Observers report published last month about anti-doping procedures at Rio 2016 found that more than 4,000 athletes were not drugs tested in 2016 before competing.

It highlighted the "inadequacy" of test distribution planning by International Federations across 10 "high-risk" sports.

There is a far greater focus on intelligence-led testing by the International Federations compared to in 2009.

The number of Therapeutic Use Exemptions (TUEs) processed by International Federations has decreased by almost 80 per cent between 2009 and 2015.

This statistic is misleading, however, because of a rule change which meant athletes no longer have to apply for special permission to use beta-2-agonist asthma products.

"The findings provide a clear indication as to how much the Summer Olympic IFs spend globally on fulfilling their obligations under the WADA Code," said ASOIF President Francesco Ricci Bitti in a statement accompanying the report's release.

"We expect the research outcomes to deliver valuable information for the ongoing discussion concerning how to enhance the future fight against doping and the potential creation of an independent authority for testing.

"Our ultimate objective must be to protect athletes in the best way possible."

It is expected that a similar study will now be undertaken by Winter Olympic and IOC-recognised International Federations.