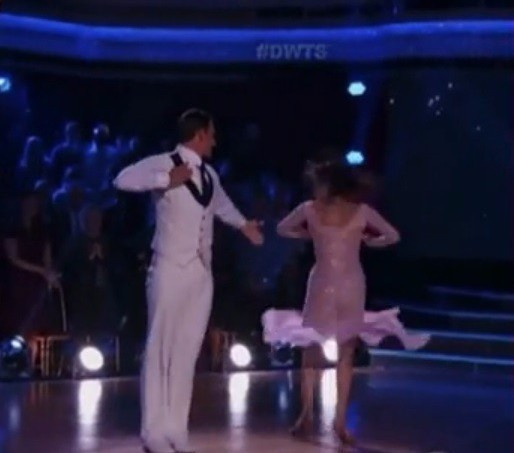 Protesters interrupted swimmer Ryan Lochte’s debut on American reality television programme Dancing with the Stars in a show of opposition to the 32-year-old’s actions at the Olympic Games in Rio de Janeiro last month.

The incident occurred during yesterday’s two-hour live premiere, with security forced to intervene.

Two men stormed onto the dancefloor after Lochte, banned for 10 months by the United States Olympic Committee (USOC) and USA Swimming after he fabricated a robbery story during last month’s Games, had performed with partner Cheryl Burke.

The swimmer and Burke were about to receive their scores from the judging panel when the protesters, wearing tee-shirts with Lochte’s name crossed out, appeared on stage.

A video was released earlier today by ABC which showed judge Carrie Ann Inaba shouting "excuse me" at the two men.

They were tackled to the ground by the security staff before eventually being removed from the arena.

Both men were arrested, the Los Angeles Police Department confirmed, and are being held “pending charges on suspicion of trespassing”.

The six-time Olympic gold medallist appeared stunned during the incident and admitted when interviewed by host Tom Bergeron that he felt "hurt".

"So many feelings are going through my head right now," he said.

"But I came out here, I wanted to do something that I’m completely not comfortable with, and I did.

"And I came out with a big smile, and I had the best dance partner."

Dance partner Burke claimed she was "shocked" by the protest but hopes that Lochte, subjected to fierce criticism both during and after Rio 2016 for his conduct, can be given a chance throughout the rest of the “Dancing with the Stars” show.

"Me and Ryan have gotten the pleasure to know each other, and he’s an amazing guy.

"He’s great, and kind, and he’s just here working his butt off, and trying to do what he’s supposed to be doing, which is dancing.

"So I hope people give him a chance."

Lochte was among four US swimmers that initially claimed they had been robbed at gunpoint when returning to the Olympic Village before closed circuit television footage emerged of the men vandalising a petrol station following a night out.

The trio were given four-month suspensions, with Lochte handed a 10-month sanction.

It rules him out of competing at the United States’ National Championships next year, which will result in him missing the World Championships in Budapest.

He will be given no direct support or access to training centres during the 10 months, and will not receive a monthly stipend - a sum of money - from USA Swimming or the USOC.

Lochte has also agreed to forfeit medal funding which he would have been entitled to for winning a gold medal at Rio 2016 in the men’s 4x200 metres freestyle relay.