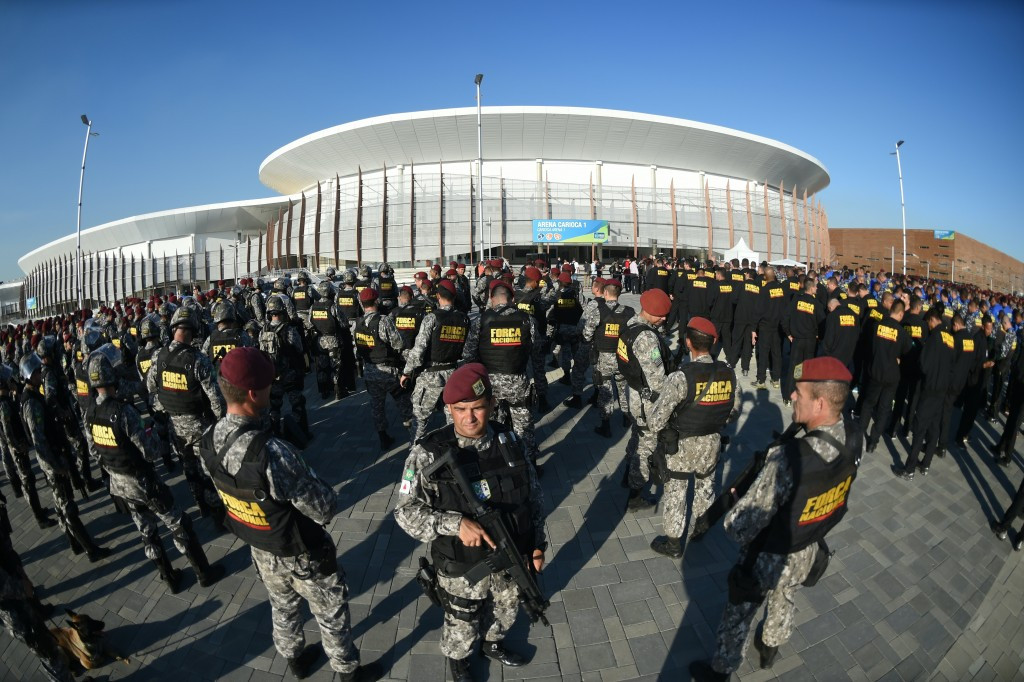 Hundreds of Brazilian National Force officers, who form part of the security force for next month’s Olympic Games in Rio de Janeiro, have threatened to quit over poor accommodation and working conditions.

A meeting of the officers has been held outside the Government complex where they are being housed, with many encouraging their peers to vacate their roles.

"Morale is rock bottom," one member of the National Force, which is made up of police officers and firefighters from states across Brazil, told Reuters.

The officer, speaking on the condition of anonymity to avoid punishment by superiors, said dozens of colleagues have decided to return to their home states because of delayed pay and unfurnished accommodation at the newly-built Vila Carioca public housing complex.

National Force members have been shown to be carrying mattresses and driving refrigerators to their unfurnished lodgings in video footage broadcast on Brazilian television network Globo.

"I'm having to sleep on the floor, our food arrives late and I still haven't been paid," the unnamed officer added.

Elisandro Lotin, the President of Brazil’s national union of private and non-commissioned officers in the police and fire services, has met with Celso Perioli, Brazil’s national secretary of public security, to air the National Force members' grievances.

"He guaranteed that he was already taking measures to resolve the problems," Lotin was reported as saying by the Washington Post.

The Justice Ministry, which is responsible for the National Force, said in a statement that pay and board for security forces were both ensured.

It also said a further 4,500 retired or on-leave police officers could be called upon if it's deemed necessary.

"The structure for the security of Olympic installations is guaranteed, as are the daily allowances for professionals from the National Force of Public Security that will act in the Olympic Games and Paralympics," a spokesman for the Justice Ministry said in an email.

Organisers have confirmed around 85,000 soldiers, police officers and other security staff will be deployed for the Rio 2016 Olympics.

Local media have reported that 5,000 members of the National Force will be on hand, a considerably smaller number than the 9,600 officers originally envisaged.

The shortfall has been filled through the deployment of more troops.

National Force members' complaints add to security concerns ahead of Rio 2016 amid rising street violence and petty crime in the host city.

Earlier this week, a French intelligence agency said France’s delegation was the target of a terrorist plot from a Brazilian Islamist.

The leader of the military intelligence directorate in the country, General Christophe Gomart, told a Parliamentary Commission in May of the planned attack on the French team during a hearing into the atrocities in Paris in November, where 130 people lost their lives.

Gomart said they were made aware of the plot by a "partner agency" in a published transcript of the hearing.

Brazil’s Defence Minister Raul Jungmann has said security preparations for Rio 2016 will be reviewed after the devastating terrorist attack on French city Nice on Thursday (July 14).

A man drove a truck into a crowd of people celebrating Bastille Day on the Promenade des Anglais, leaving at least 84 dead and 200 injured.

"The attack in Nice is worrisome for us, too," Jungmann told CBN Radio.

"We have learned a few lessons.

"We will review procedures, make more barriers, searches and apply much tighter security.

"Unfortunately that can be an extra difficulty for people, but it is for their safety."