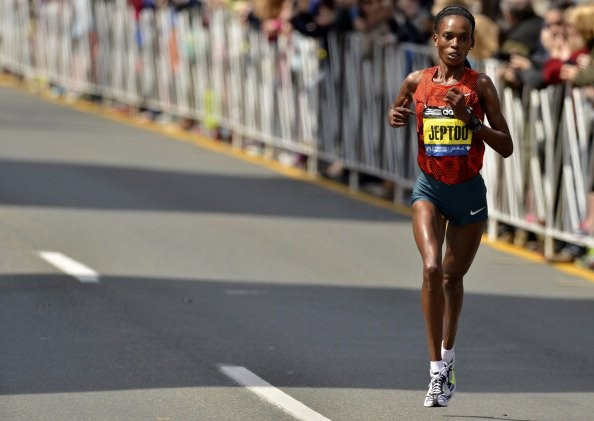 Marathon runner Rita Jeptoo has reportedly denied accusations that she deliberately hung-up midway through her hearing with the Court of Arbitration for Sport (CAS) today.

In a case which raises questions of how CAS deals with athletes implicated in doping cases, the Kenyan reportedly "opted to leave the hearing during opening statements" after initially participating without support from either a lawyer or from her national governing body.

The three-time Boston Marathon champion, who was handed a two-year suspension in 2014 by Athletics Kenya following a positive test for erythropoietin, is facing an appeal from the International Association of Athletics Federations (IAAF).

They are seeking for her ban to be extended from two to 12 years and for her to be stripped of her 2014 Boston title due to "deliberate usage" of the banned blood-booster and for "attempted tampering" of samples.

"The hearing is being held today in the presence of the IAAF representatives," a CAS statement outlined.

"Ms Jeptoo joined the initial phase of the hearing by telephone but opted to leave the hearing during opening statements.

"The CAS Panel decided to proceed with the hearing in Ms Jeptoo’s absence.

"Athletics Kenya did not participate in the hearing despite previously announcing their attendance."

This version of events has been disputed, however, with Kenyan journalist Saddique Shaban reporting on Twitter how Jeptoo alleges that she called the court but was only replied to in French, a language she does not speak.

She was then supposedly scolded for "disrupting the court  proceedings".

Lawyer Sarah Ochwada announced earlier this week she was pulling out ahead of the hearing, citing "prejudice" against her client.

Ochwada claimed that Jeptoo has no access to facilities required for her to participate in the hearing via a video conference and was further handicapped by date clashing with a Kenyan public holiday today, making it difficult for her to summon witnesses.

"A hearing was initially scheduled to take place in April 2016 but was postponed when Ms Jeptoo’s first counsel withdrew shortly before the hearing," the CAS statement added.

"Ms Jeptoo then requested legal aid from the International Council of Arbitration for Sport (ICAS), the governing body of the CAS, and was granted the assistance of a pro bono lawyer from Nairobi to assist her with the preparation of her case and to represent her at the hearing.

"On 3 May 2016, Ms Jeptoo’s new counsel confirmed availability, without reservation, for the proposed hearing date of 7 July 2016.

"On 5 July 2016, two days before the hearing, Ms Jeptoo’s counsel informed the CAS that she resigned from her role as counsel to Ms Jeptoo and made her resignation public.

"On the same day, the CAS Court Office attempted to contact Ms. Jeptoo to discuss practical arrangements for her participation in the hearing, as well as the appointment of new counsel.

"Ms. Jeptoo neither responded timely to such correspondence and phone calls, nor requested an adjournment of the hearing."

The case comes as Kenya remains riddled with doping problems, with special testing currently taking place of all athletes due to compete at next month's Olympic Games in Rio de Janeiro.

Leading agent Federico Rosa, who has represented high-profile Kenyan athletes, including Jeptoo, has also appeared in court today in Kibera for contravening new doping laws in the African country.

The Italian is being investigated for conspiracy to cause injuries to professional athletes through doping, a situation that bars them from attending IAAF races.