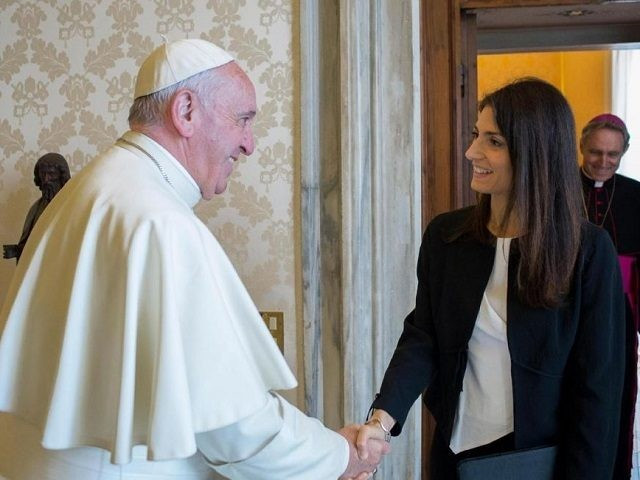 Rome Mayor Virginia Raggi has used her first meeting with Pope Francis to again voice her opposition to the Italian capital's bid for the 2024 Olympics and Paralympics and indicate that she will organise a referendum to see if the city should continue with its campaign.

During an interview afterwards with Vatican Radio, Raggi claimed that Rome had only just finished paying for the 1990 FIFA World Cup, which she revealed was €92 million (£77 million/$102 million) per year.

"Do the math and see how much these events weigh heavily on the peoples' shoulders," the 37-year-old lawyer, elected as Rome's first female Mayor last month, said.

"God forbid, but at a time when we have a debt of €13 billion (£10 billion/$15 billion) just for extraordinary management, I think it isn't ethical or right to ask citizens to incur more debt for at least 20, 30 or 40 years.

"The Romans, up to now and during the electoral campaign, never spoke to me about the Olympics.

"If the Romans were to ask me for a referendum we will obviously evaluate holding one, underlining all the pros and cons, and the costs. "

Raggi was accompanied to the audience with the Pope by her parents and her six-year-old son.

Raggi said that the meeting went “very well” and was “very exciting".

Rome 2024 officials have consistently claimed they do not believe their bid is under threat, despite Raggi having taken every opportunity to criticise it.

But the first meeting of the new Rome Council under Raggi's leadership next Wednesday (July 7) could prove critical to its future.

During the election, Raggi campaigned on a manifesto of trying to sort out Rome's most pressing problems, including traffic congestion, waste management, lack of social housing and the endemic corruption in the city.

At the meeting with the Pope she showed collection of video-messages recorded by local citizens, who she called the voices of "forgotten Rome", living in some of the poorest and most run-down parts of the capital.

Rome is currently bidding against Budapest, Los Angeles and Paris.

The International Olympic Committee is due to choose a host city at its Session in Lima in September 2017.