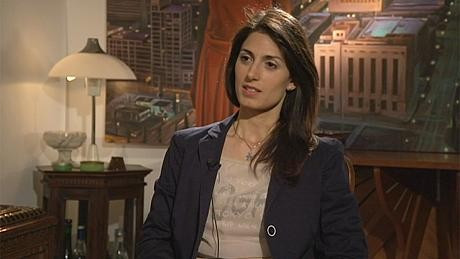 New Rome Mayor Virginia Raggi has repeated her opposition to the city's bid to host the 2024 Olympics and Paralympics, leaving it in doubt as to whether it will be able to continue without her support.

The Five Star Movement politician, a 37-year-old lawyer, won the election on Sunday (June 19) with 67.2 per cent of the vote and is due to officially assume office tomorrow.

Raggi has repeatedly voiced concerns about the attempt by Rome 2024 to the event back to the city for the first time since 1960.

"It's not really a priority for the people of Rome," she told Euronews tonight in her first interview as Mayor.

"They seem to me to be more like construction Olympics than sporting Olympics.

"The economic and historic data tells us all the cities that have hosted them have indebted themselves to the hilt."

"I am in favour of sport, but let's begin with city sporting facilities.

"Rome has over 160 of them and they are falling to pieces, and no one ever cared to maintain or renovate them".

"For the bid, we need the okay of the city, CONI and the Government," he told Italian news agency ANSA.

"If one of these goes the bid will fail.

"It's true there are other priorities but you shouldn't have prejudices against the bid."

Italian officials are currently proceeding with preparations for the bid assuming that they will continue in a race which also includes Budapest, Los Angeles and Paris.

"The [arrival of a] new partner at the city of Rome doesn't change our plans," Malagò said.

"Ask her what she intends to do.

"I only call on her to be honest and cooperate.

"Our only interest is to support the bid.

"The new Mayor came to CONI [headquarters] before the elections.

"It didn't seem that there was a clear no and we don't think there should be one."

A decision on which city will host the 2024 Olympics and Paralympics is due to be made by the International Olympic Committee at its Session in Lima in September 2017.