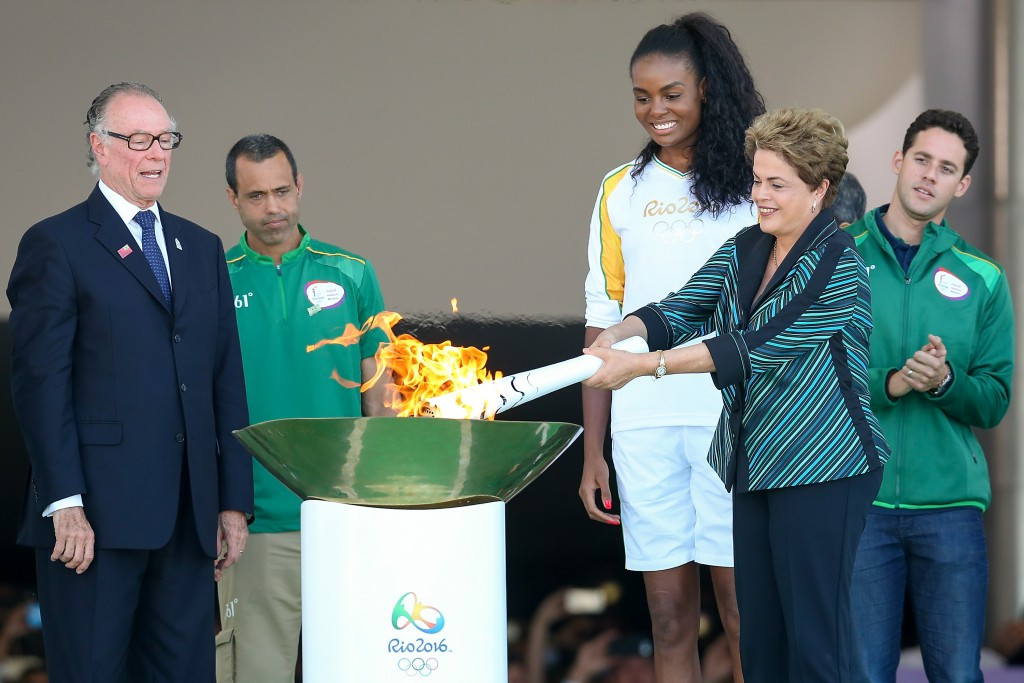 Brazil's under-fire President Dilma Rousseff rekindled the Olympic flame for the first time on Brazilian soil here this morning to set into motion a Torch Relay due to last for the next 94 days until the Opening Ceremony of Rio 2016 on August 5.

Rousseff faces being suspended from office in little more than a week's time as impeachment proceedings continue in the Senate, but there was a polite smattering of applause as she entered her official workplace this morning alongside Sports Minster Ricardo Leyser and Rio 2016 President Carlos Nuzman.

It came two hours after the flame touched down here, where it was carried by Nuzman after being transported from Lausanne overnight.

“Today is a special day in which we are celebrating the hard work that we have done since we were awarded the Games,” Rousseff said.

"This is a historic moment in the history of Brazil and the Olympic Games.

"I am very proud to welcome the Olympic flame - the great hope of humanity, peace, union and friendship.

"For the next 94 days, everybody is going to see the natural beauty of the country and the diversity and warmth of the Brazilian people.

"We are going to contaminate this nation with the Olympic spirit and involve all the people in this historic opportunity.

"It will be a very happy moment to see the competition in the party that will be the Olympic Games."

Rousseff invoked the spirit of Olympic founder Baron Pierre de Coubertin and former South African President Nelson Mandela to inspire the country, before claiming that "Brazil is ready to make the most efficient edition of the Olympic Games".

She claimed the venues are all ready and guaranteed the safety of all those attending.

"We know the political difficulties there is now in our country," the President concluded to a more rousing reception.

"We know our political instability.

"But Brazil will be capable of pulling off the Games even in this very, very difficult period we are living in now.

"We have created the conditions for this and we are going to receive very well.

"The flame can be a guide for humanity and celebrate peace.

"We are going to be proud to offer the most beautiful Olympic Games in the world, and show the world our value, inside and outside the venues.

Rousseff, who has accused her opponents of launching an undemocratic coup d'état, told CNN last week she would be "very sad" to be removed before the Olympics, as she has worked "very hard" to realise the Games from day one.

She spoke after Nuzman, Leyser and Brazilian swimmer Thiago Pereira, Olympic silver medallist in the 400 metres medley at London 2012.

He called for the population to be the extra-man inspiring the team to sporting success.

The flame was then lit before being set on its way by two-time Olympic volleyball gold medallist Fabiana Claudino, who began her leg with cheers from flag-waving Brazilians.

A group of around 100 protesters grouped outside soon after the Torch departed, shouting and beating drums in support of Rousseff and against the impeachment process.

The demonstrators, mostly students, were cordoned off but not removed by police as proceedings remained peaceful.

There were, however, reported scuffled and arrests between protesters and police at other points.

Protesters opposing Rousseff, holding banners displaying the message, in English, "OlyImpeachment is here", were also seen at other stages.

Overall, however, the first day of the Relay appears to have been a successful one, although it was overshadowed in some quarters today here by a nationwide 72-hour WhatsApp ban, affecting around 100 million users, introduced for unspecified reasons by a Judge after a court order and only lifted this afternoon.