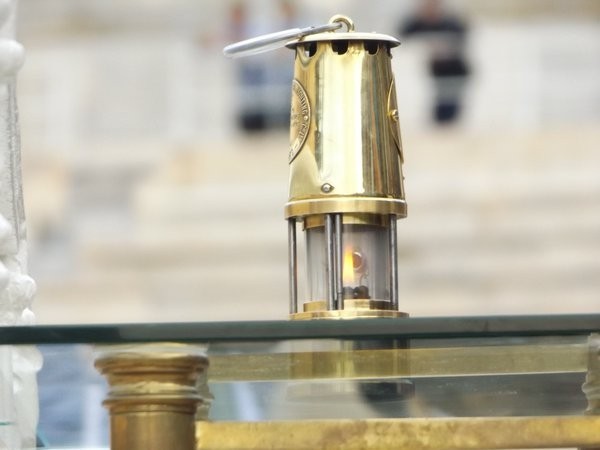 The Rio 2016 flame is not yet quite on the way to Rio de Janeiro and will first visit Switzerland where it will be greeted at the United Nations headquarters in Geneva tomorrow before arriving at the Olympic Museum in Lausanne.

The visit will coincide with exhibitions and displays on the theme of the Rio Games.

Ten original sculptures, known as ‘’Bichos", are on display in the museum gardens, having been created by carioca artist Felipe Barbosa with the intention of evoking the animals of the forests of Amazonia and Tijuca.

"This is a good initiative combination of Rio 2016, the IOC (International Olympic Committee) and ourselves it shows that symbolically that we are all together in this festival of sport,’ said Hellenic Olympic Committee President Spyros Capralos as the Olympic flame left Greek soil.

It will be the third time the Torch Relay has visited Lausanne.

In 1948, the flame came overland across Europe from Italy to the Channel.

It crossed the Swiss border late the previous night where Roger Charmillot of the national boxing federation was the first bearer before it arrived in Lausanne mid afternoon.

The Flame was accompanied throughout its journey by motorcycle outriders and official Sandy Duncan in a Rolls Royce which flew the Olympic and British flags.

There was one very important observer to the proceedings.

“We noted the presence of Marie Baroness de Coubertin,in spite of her age still wished to associate herself with the work of her husband," said local newspaper Gazette de Lausanne.

‘At precisely a quarter to five, the athlete carrying the torch appeared at Mon Repos, flanked by runners representing athletic and gymnastic clubs of our town."

Georges Bridel, President du Grand Conseil was there to welcome the flame at Mon Repos, then the headquarters of the IOC, speaking of "the concord that was possible between peoples’’.

Swiss Olympic President Marcel Henniger was also present and clearly touched by the ‘’undying spirit of the Olympic Games" - a spirit symbolised by the flame.

“The spirit is not only passed from hand to hand but from heart to heart” said Henniger.

Sandy Duncan, representing the British Organising Committee, then told the crowd: ‘’We will look after the flame in the same spirit until it reaches Wembley where it will burn throughout the Games.”

When it visited the grave of Pierre de Coubertin,the runners paused in silent tribute watched by those who had come to see the flame pass.

Coubertin’s widow Marie ‘’was visibly touched by the honour paid to her late husband", said one report.

“As with the other events, this simple tribute of absolute simplicity fulfilled the purpose envisaged by the organisers - everything was organised to perfection."

The flame itself headed away carried by a runner from the local Stade Lausanne club in the directioh of Morges.

It then passed through Geneva before crossing into France - and was at Wembley for the Opening Ceremony a week later.

In more recent years, the relays have lasted longer and become even more ambitious.

In 1984, the Los Angeles Games Organising Committee had announced an extensive Torch Relay across the United States.

Runners would be asked to pay to run with the flame in what they called a "Youth Legacy Kilometer", with the proceeds to go to youth sport.

This caused a bitter dispute with the Greek authorities who accused the Americans of commercialisation.

For a while it was unclear whether a flame for Los Angeles 1984 would be lit in Ancient Olympia at all.

In a curious episode some Swiss students kindled a flame at the ancient site and this was transported to Lausanne in a safety lamp a few days before the scheduled ceremony in Olympia.

But the Olympic flame was kindled in Olympia in an official ceremony and the standby lamp was never used.

Twenty years later, the flame returned to Lausanne for real.

Athens was the host city for the 2004 Games and organisers transformed what would have been the shortest relay into a journey across the world.

On day 20 of this latter day odyssey, the flame arrived in Geneva and made its way to Lausanne.

This time, there was sunshine and an enthusiastic crowd of cheering youngsters who welcomed the relay to the chateau of Mon Repos in the centre of the city.

The calvacade made its way under blue skies and included escorts carrying the blue and white flag of Greece.

Denis Oswald, chairman of the 2004 IOC Coordination Commission, was among the 120 torch bearers.

Balloonist Bertrand Piccard was also on hand to run in his home town.

By 2004 , the sponsors of the relay were also entitled to nominate worthy runners.

In Lausanne, these included 23-year-old student Christina Kitsos, a Swiss with Greek heritage.

"To bring together personalities and unknown runners is a very good way to spread the Olympic idea,’’ she said.

Jacques Rogge became only the second incumbent IOC President to do so after Juan Antonio Samaranch in 1992.

“When I first heard Athens 2004’s proposal for a global Torch Relay, I was excited because it had not been done before and it sends the message of the Games to the entire world," he said.

“The flame’s message is one of peace because it reminds the world of the truce. It also symbolises the world’s unity because it unites people of different countries, religions nationalities and the cities that have hosted the Olympics in the past. It is therefore a symbol with a double meaning.”

Outside IOC headquarters at the Chateau de Vidy, he passed the flame to Adrian Bachmann, a canoeist at the 2000 Games., who took the torch towards the Olympic museum

A temporary cauldron outside the museum was lit by Carlos Lima who had been part of the Swiss handball team at the 1996 Olympics.

Huge crowds had gathered and they heard a performance of "Pass the Flame, Unite the World" the anthem of the 2004 global Torch Relay.

The visit of the flame in 2016 will again be only fleeting but there is one other Olympic flame which burns constantly in Lausanne.

This was lit by double Olympic figure skating champion Katarina Witt in 1993 and, to this day, it welcomes visitors to the Olympic Museum.