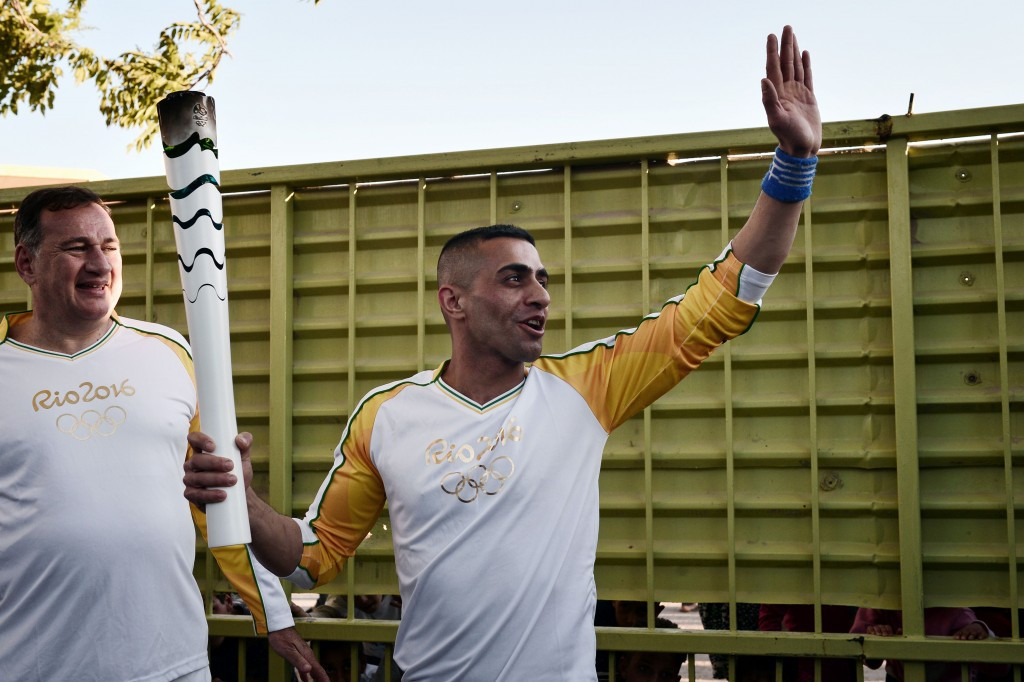 Syrian swimmer Ibrahim Al Hussein carried the Olympic Flame on a glorious sunlit evening, providing a brief respite from the reality of a life far from their homelands for many of the refugees who now live here.

The Olympic torch is intended to be a symbol of hope and its short passage helped the many refugees who reside in Greece forget their troubles and it may well prove the enduring theme of this Olympic year.

“My message to all refugees, not just from Syria but from Iraq and Afghanistan is - I think they should not stay in the camp and do nothing - get out of the camp and work for their dream, to be what they want to become in the future,” said Al Hussein, who was carrying the Rio 2016 Olympic Torch on behalf of refugee athletes.

“I have run in the torch relay, not only on my behalf but also on behalf of every refugee who has had difficulties, it is truly an honour.”

Hellenic Olympic Committee (HOC) President Spyros Capralos added: “He is a great person, he was an athlete in his country but he lost part of his leg.

“He came here, requested asylum and continued his sport.

“It shows the courage that this young man has that he keeps competing taking part in competition.

“That Ibrahim has carried this flame has showed that we can have a better world for all of us.”

Hundreds of children had lined the route of the run, though whether they actually saw the flame is anybody’s guess.

It was pandemonium as Al Hussein, who had been a judoka and swimmer before losing part of his right leg to a bomb in 2012, took hold of the Torch, before he was engulfed in a phalanx of cameras.

Ibrahim did not so much run with the Torch; he was almost carried along by the crowd and it was as just as well that he was accompanied every step of the way by Capralos, well used to a physical buffeting from water polo days where he represented Greece at the 1984 Los Angeles Olympic Games.

“This was a moment of emotion for me, one of the greatest moments of my sporting career,” added Capralos.

The HOC President had suggested that a refugee bear the flame when International Olympic Committee (IOC) President Thomas Bach visited this centre in January.

Since then, funds have been made available for sporting equipment to help communities adjust to their new surroundings.

“This flame means solidarity and peace around the world and we are very happy to make it happen,” he said.

As Al Hussein’s short walk with the torch, less than 200 metres, came to an end, he was hustled away into one of the huts on the outskirts of the camp, to gather his thoughts, before emerging a few minutes later to speak about what it meant.

Again he found himself surrounded by a media scrum but he handled the ordeal with the aplomb of a veteran speaking both Arabic and Greek.

“It was a beautiful feeling to have the torch inside the camp and I wanted the Greek people to feel it,” he said.

“We appreciate everything the Greek people have done for all the refugees and that they feel this crisis with us.

"I wish for this crisis to end and for them to return to their homeland.”

Al Hussein is set to swim in the Greek National Championships later this month and could well make the Paralympic team for Rio 2016.

He now speaks the language and wore a Greek wristband throughout the run to reflect his feelings for the country that has now become his home.

The Eleonas Camp is barely a metro stop away from the city centre, where tourists throng to the  bazaar in Monastiraki and the restaurants of Plaka beneath the Acropolis.

Abdullah, who arrived here last month with his wife Hajan from Afghanistan, told insidethegames that they were “happy to be free” and while his eight month old baby Keyan is too young to understand the Olympic Torch, in years to come his parents will tell him all about this special day.

The camp and its nearby extension is a temporary home to some 1,600 refugees, mostly from Syria, Afghanistan and Iran, with around 40 per cent of those being children.

Simply finding the camp it is not easy - it is tucked down a dusty road past disused factories and scrap yards and is hidden behind a green gate.

This Torch Relay is designed to ensure the refugee crisis is far from hidden.

“This is just one part of the activities that have been going on here since the beginning of the year.

“It is a commitment which is very symbolic in accordance with Olympic values.

“This event will have a great effect of solidarity and help make sure this is something that is not forgotten.”

“The refugee problem is a feature of our times and it is important to raise awareness to give hope to the refugees that they are not forgotten and that there are people who embrace them."

Those who have been displaced will also take centre stage at this year’s Games in the Brazilian city when a team of Refugees will compete under the Olympic flag and live together in the Athletes’ Village.

It will be handed to the representatives of Rio 2016 tomorrow and after a brief stay at the Olympic Museum in Lausanne, it will then be flown to Brazil in a special safety lamp before touching down in Brasilia on May 3.