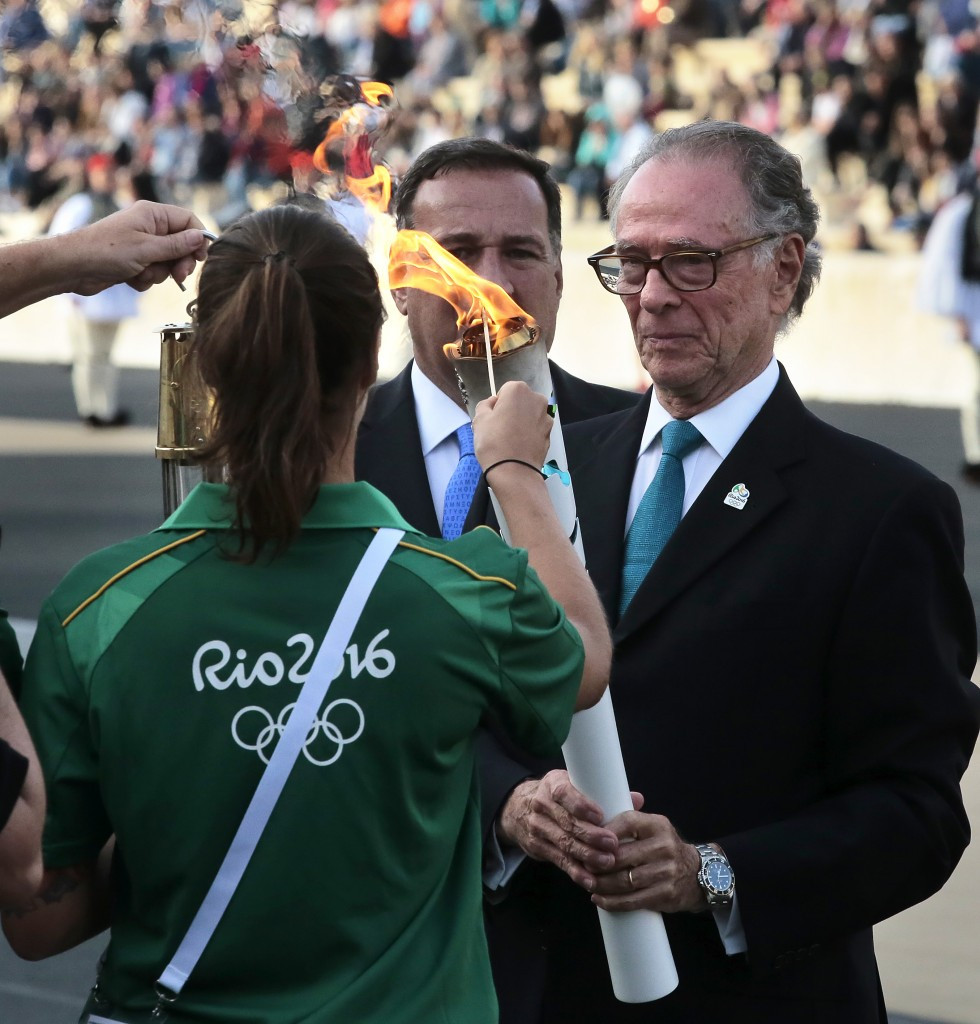 Rio 2016 President Carlos Nuzman has formally received the Olympic flame on behalf of his city at a colourful Handover Ceremony in Athens.

It was held the very Stadium which had seen the Olympic Games revived for the modern era 120 years ago.

“Today we move closer to history being made when the Olympic cauldron is lit in Rio," said Nuzman as he took delivery of the flame in a specially designed safety lamp.

"For Brazilians it will be a moment of national pride.

"For South America it will mark history.

"Excitement is building in Brazil and will build even more as the torch relay lights up all parts of the country.

“The best athletes in the world are now putting the finishing touches to their preparations for the Games and we are doing the same at the venues that will host them and the city that welcomes them."

Nuzman believes countries that have never hosted the Olympic Games will be inspired by the example of Rio 2016.

"It will send a powerful message to the world that the Olympic Games belong to all peoples, to all continents , to all mankind," he said.

At the entrance to the Stadium, they had flown the flags of every Olympic host nation from 1896 to the present day.

The ceremonial trooping of giant flags of Greece and Brazil began the ceremony.

He is no stranger to ceremonial roles having lit the cauldron at the Olympic Opening Ceremony itself for Athens 2004.

Come to that his fellow bearer and triple weighlifting gold medallist Pirros Dimas should know a thing or two about flags.

He marched alone into the Stadium carrying the Greek flag at the start of the athletes parade at those same Athens Games.

Dimas had been born in Albania and decided to make his home and a life here in Greece.

His story had a particular resonance this week.

Watching in the Stadium was Ibrahim Al Hussein, the refugee Torchbearer who ran with the Olympic fire at the Eleonas Reception Centre yesterday.

‘’It brought a very special meaning to this year’s Torch Relay and a unique message of solidarity and fraternity amongst peoples," Hellenic Olympic Committee President Spyros Capralos told the crowd.

The Olympic founder Baron Pierre de Coubertin had once told sportsmen and women to, "Remember the Fire you brought from Olympia, for it brought light and warmth to your times."

It is a sentiment that is particularly relevant this year.

In tribute to the new host city so steeped in carnival, the music took on a Brazilian twist with the strains of Cidade Maravllhosa.

It drew an appreciative gasp of recognition from the Brazilians in the crowd, unmistakable in those well known colours of yellow and green.

They broke into an impromptu chorus just as Brazilian crowds are wont to do when their national anthem is abbreviated.

The infectious dance rhythms of the Bossa Nova and Samba have also inspired the Rio 2016 mascots which are named after musicians Vinicius de Moraes and Tom Jobim.

In 1996 she had lit the Cauldron at the Handover Ceremony for Atlanta and then won a silver medal later that summer.

Some 450 runners have carried the flame across this historic nation over the past week, some great champions of Greek sport and some from other nations too.

Portugal’s 1988 marathon champion Rosa Mota was part of the relay in Marathon, surely the most appropriate place for a her to do so.

Three sounds have resonated every night as the flame was welcomed into towns across Greece.

The national anthems of Brazil and Greece, and too the Olympic anthem, composed for the 1896 Games by Spiros Filiskos Samaras.

So popular did it prove at those first Games that the King of Greece was amongst those who called for an encore.

State President Prokopios Pavlopoulos did not go that far but he clearly enjoyed the performance by the children’s choir of the National Olympic Academy of Greece.

The moment of Handover was signalled by the entrance of the high priestess Katerina Lehou and her retinue.

The music featured arrangements for lyre, reconstructed as if from ancient times.

The maidens known as Caryatids Kores were clad once again in those long flowing light turquoise robes which had proved so striking in Ancient Olympia.

Their slow ritual dancing was designed to represent “the archetypal figures of young female Greeks in ancient statues and highlight their beauty’".

The Nereids or sea nymphs continued with a ritual dance.

This year, the theme both in Olympia and here in Athens has concentrated on the mythology of the sea.

Unusually, the young men or Kouroi also took part in the Ceremony with movements and representations inspired by ancient vessels, murals, sculpture and reports on mythology and history.

The rhythm of the music became intense, a traditional Greek Zonaradiko.

Some of the priestesses and young men danced on the steep marble steps of the stadium, which heightened the dramatic effect.

In contrast to four years ago for London 2012, the sun shone throughout, even as the symbolic doves of peace were released.

It is not too easy to find a pure white bird in Greece but a pigeon fancier in Katerini in Northern Greece came up trumps.

He supplied a flight of them for this Ceremony.

When the formal part of the Ceremony was over, Greek folk dancers were joined by Brazilian street dancers and gymnasts in a kaleidoscope of colour and vibrant sound.

Their dancing continued long into the night.

They were led by Giba Goncalves who was one of the star dancers in the Rio 2016 Handover segment at the Closing Ceremony in London .

After this many expect the flame to dance its way for the 95-day journey around Brazil.

Judging by the performers here they could certainly manage it, though first it will visit the International Olympic Committee headquarters in Lausanne and the United Nations in Geneva.