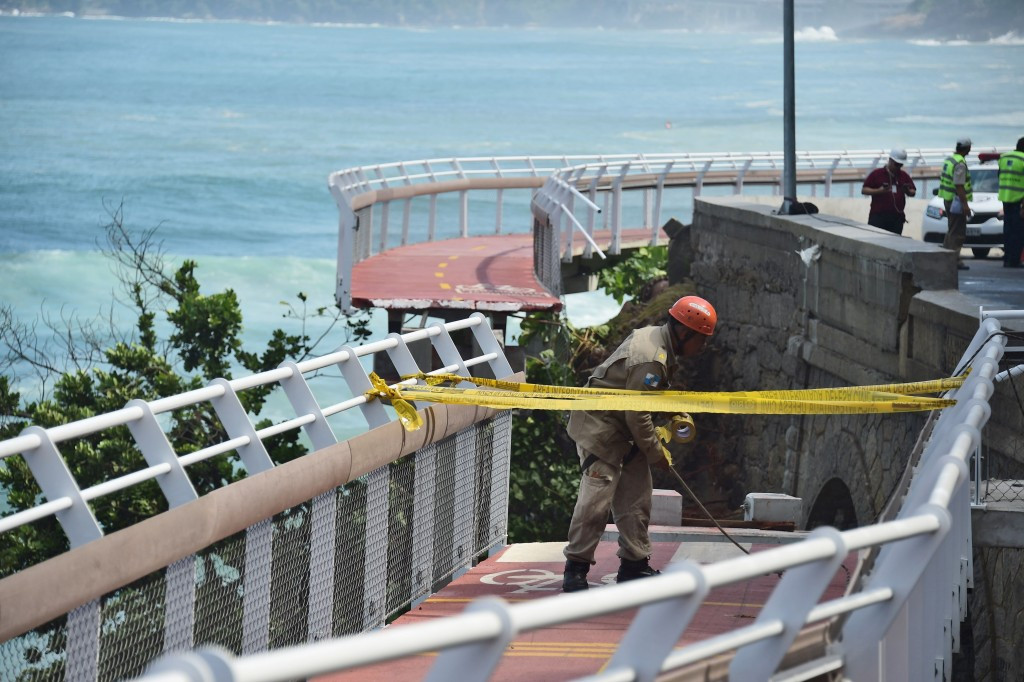 At least two people have been killed following the collapse of part of a new cycle-way built in order to connect the centre of Rio de Janeiro with Barra de Tijuca, the area due to host the main Olympic Park at this year's Games.

A 50 metres section of pathway on the elevated cycle lane collapsed after a huge wave smashed into the shoreline.

Five people are thought to have been on the section of the path which collapsed when the incident happened.

Investigations are taking place in order to ascertain whether the failure was due to an engineering flaw or poor construction.

The path, stretching for 3.9 kilometres from Lilblon, to the east of Ipanema Beach, to São Conrado, was opened in January.

It runs alongside a mountainside road which forms a major part of Rio 2016 transport plans while also forming part of the course for the cycling road race.

It was billed as a bonus part of the Olympic Transport plan, with a further extension planned to link São Conrado with Barra de Tijuca, the location for the main Olympic Park during Rio 2016.

This was a major legacy success of the Games, organisers claimed during last week's IOC Coordination Commission inspection visit, boosting opportunities for locals and tourists.

Rio de Janeiro Mayor Eduardo Paes had hailed the cycle-way as “the most beautiful bike path in the world”.

Its collapse is thus a major blow which also raises concerns about the safety of other venues.

At least one more person is still missing, according to municipal secretary Pedro Paulo Carvalho, with two others thought to have been rescued.

“It’s clear that an accident like this is unpardonable,” he told Globo TV.

Both victims were removed from the water by helicopter.

The tragedy comes just hours after the lighting of the Olympic flame in Ancient Olympia to start a Torch Relay which it is hoped will raise excitement levels and support for the Games.

Paes is cutting short his visit to Greece and will return to Rio de Janeiro to spearhead the investigation, he announced.

"Our thoughts and sympathies are with the people and their families and friends affected by the tragic accident," added Rio 2016 in a statement.