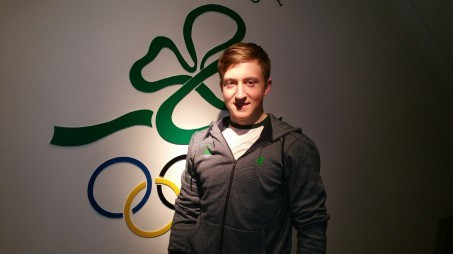 Sixteen-year-old Gary Skinner will be the only competitor for Ireland at the upcoming Winter Youth Olympic Games in Lillehammer.

The skier will compete in the slalom, giant slalom, super-G and super combined in the Norwegian town, with the Games getting underway on February 12.

He is a member of the Ski Club of Ireland and Austria's Leogang Ski Racing Club, and was selected in his country's team for the European Youth Olympic Winter Festival in January last year.

Lillehammer, which will see 71 countries compete across 15 sports, is set to be a huge step up in standard for the teenager.

He has, however, raced in the New Zealand/Australia Cup, the Australian National Championships and various other International Ski Federation (FIS) races throughout Europe.

Skinner, from Templeogue, Dublin, was kitted out in New Balance Team Ireland clothing at a briefing meeting held at the Olympic Council of Ireland offices in Howth along with Chef de Mission Anne O’Connor.

Ireland also sent one competitor to the inaugural Winter Youth Olympic Games in Innsbruck, Austria, in 2012.

Florence Bell, also a skier, finished 24th in the slalom and 34th in the giant slalom.

Ireland has also competed at six Winter Olympic Games, but the European country has never won a medal.