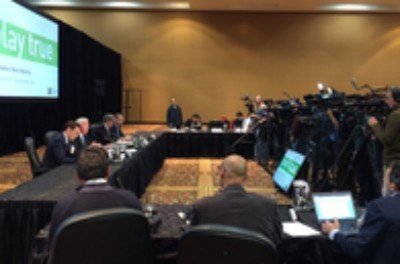 There is no longer a Russian representative on the World Anti-Doping Agency's (WADA) 38-member Foundation Board, with the country's Deputy Sports Minister Pavel Kolobkov barred from participating until problems with the Russian Anti-Doping Agency (RUSADA) are resolved.

RUSADA was declared non-compliant with the World Anti-Doping Code in November following the publication of WADA's Independent Commission which confirmed reports of state-supported doping within Russian athletics.

Kolobkov, who participated in the last Foundation Board meeting in Colorado Springs in November, had been one of two Council of Europe Representatives on the panel alongside Italy's Gabriella Battaini-Dragoni.

He is no longer permitted to serve on the panel, with only Battaini-Dragoni included on the latest list.

The other member is "to be advised".

"If and when compliance is regained, it will be a European decision to re-elect a representative back to the Board," a WADA spokesperson told insidethegames today.

The Foundation Board is headed by WADA President Sir Craig Reedie.

The Briton is joined by South African vice-president Makhenkesi A. Stofile.

Another member is former WADA President Richard Pound, the Canadian who led the WADA Independent Commission which led to Russia's suspension by the International Association of Athletics Federations, leaving their participation at this year's Olympic Games in Rio de Janeiro in doubt.

Other notable members of the Board include America's Michael K. Gottlieb, assistant deputy director at the White House Drug Policy Office, and Susan Ley, Australia's Minister for Sport.

The full list of the new Board is available here.

The next scheduled meeting of the Foundation Board is on May 12 in Quebec.