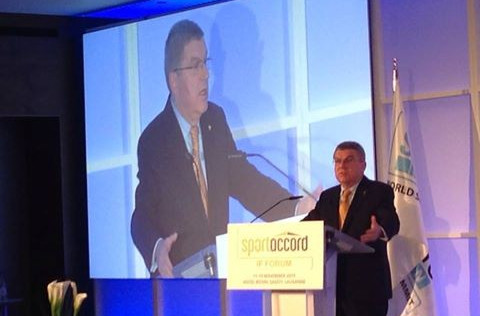 International Olympic Committee (IOC) President Thomas Bach has claimed an independent drugs testing system is "more important than ever" and believes it should be responsible for sanctioning as well as testing.

insidethegames understands such an organisation could be financed by International Federations supporting the World Anti-Doping Agency (WADA).

Speaking at the opening of the SportAccord International Federations Forum here, Bach reiterated the idea proposed at last month's Olympic Summit, where WADA set up a Working Group to propose the idea of a fully independent body which would take on a far more powerful role than its does at present.

"I would like to refer to a decision we took at the Olympic Summit a couple of weeks ago," Bach told delegates today in an address on the topical theme of "good governance in sport".

"This is more important than ever.

"We should make more effort than ever to make the whole anti-doping system independent, including sanctioning.

"We should make it independent to spread the good news that we have nothing to hide."

The speech marked Bach's first public reaction to the report of the WADA Independent Commission unveiled on Monday (November 9), which backed up claims of systemic doping within Russian athletics.

Following the damning revelations to have emerged about football world governing body FIFA this year, there has been widespread cyncism about problems in wider sporting governance.

The new independent body, proposed at the Summit attended by representatives from International Federations and National Olympic Committees, would take responsibility away from Organising Committees and governing bodies, it is hoped.

One of its main aims would be to remove any conflict of interest from those with any perceived vested interest against catching cheats.

Richard Pound, the founding WADA chair who headed the Independent Commission into the athletics allegations, believes a huge increase in WADA funding would be required to make this body feasible.

"We are living in very difficult times as far as sport and sports organisations are concerned," Bach added today.

"We should not ignore reality.

"What has happened in two major federations affects us all.

"Because people who love sport, or do not love sport perhaps more so, are asking questions.

"Sport is sport - this is what they love and what they are following.

"We must undertake all effort to convey a message of good governance and transparency to everybody."

"We have to protect them from any kind of manipulation or corruption," he said.

"We have to tell them we are doing everything to guarantee them fair competition.

"We have to appeal to parents of future athletes, to tell them we can send them to sport.

"They will be educated in the spirit of fair play and clean sport.

"That everything will be done to protect them as long as they are athletes."

Bach was speaking to a group of International Federation representatives, including Marius Vizer, the President of the International Judo Federation who stood down as SportAccord head in May following the backlash from controversial criticisms launched at Bach and his Agenda 2020 reform process.