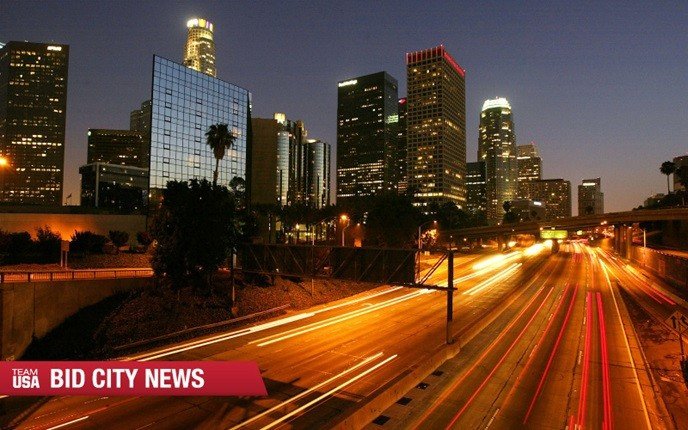 Los Angeles was today confirmed as the United States bid city for the 2024 Olympics and Paralympics, providing a deal can be worked out with the city.

A decision must be reached by September 15, the deadline set by the International Olympic Committee (IOC) for cities to make their interest known.

Scott Blackmun, chief executive of the United States Olympic Committee (USOC), revealed following a Board meeting in Denver today that they hoped to reach an agreement by the end of this month.

Los Angeles will replace Boston, whose bid collapsed last month when the city's Mayor Marty Walsh said he would refuse to sign the host city contract amid poor public support in the city.

Blackmun claimed a poll they had carried out earlier this month showed 81 per cent of local citizens in Los Angeles supported a bid.

By the time Boston's bid was dropped, 53 per cent of local people opposed it.

“We continue to think that a US bid for the 2024 Games can be successful,” said USOC chairman Larry Probst.

“The Board authorised CEO Scott Blackmun to work with Los Angeles to explore the viability of a potential bid for the 2024 Olympic and Paralympic Games.

"We hope to finalise terms that benefit both the city of Los Angeles and the Olympic Movement in the United States so that we can submit a world-class bid to the IOC by its September 15 deadline.”

Blackmun refused to reveal what details still needed to be ironed out between the USOC and Los Angeles city officials before a deal can be officially confirmed.

“Our discussions with LA today have been very, very positive, but there are complicated issues in the discussion," he said.

"We are very optimistic that we’re going to be able to get into a place that’s good for us.

"We would love to have this wrapped up by the end of August and that is still our goal."

"Over the past week, we have had very positive discussions with the United States Olympic Committee about how Los Angeles can present a strong and fiscally responsible bid on behalf of our city and nation," he told the Los Angeles Times.

"I look forward to our continuing our conversation with the USOC in the weeks ahead."

If Los Angeles is successful it would become only the second city, after London, to host the Olympics three times having staged it in 1932 and 1984.

“You can’t overestimate the importance of the experience.

"They have incredibly strong political support.

"It’s a combination of things, all of which go to suggest it’s going to be a really positive experience for the people that come to the Games if LA is fortunate enough to win.”

International Olympic Committee President Thomas Bach had last month urged the USOC to push ahead with a bid for 2024, despite the withdrawal of Boston.

"I think it would be a lost opportunity," said Blackmun.

"The Games have not been in the United States since [Atlanta] 1996.

"On the Summer side there is a whole generation of Americans that has not seen the Games on American soil.

"We want to address that."

Budapest, Hamburg, Rome and Paris have already announced they plan to bid while Baku and Toronto could also be contenders following their successful hosting of the European Games and Pan American Games respectively.