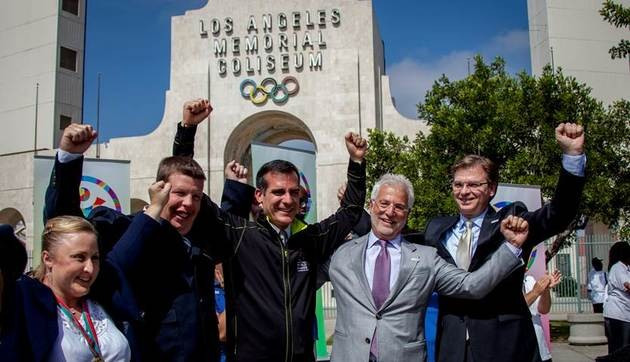 Los Angeles Mayor Eric Garcetti has officially confirmed that his city is interested in taking up the baton from Boston and launching a bid for the 2024 Olympics and Paralympics.

California's largest city, which hosted the Games in 1932 and 1984, has already started informal talks with the United States Olympic Committee (USOC), insidethegames has been told by officials arriving here for the International Olympic Committee's 128th Session, which is due to start on Friday (July 31).

San Francisco and Washington D.C., the other two cities shortlisted by the USOC during its bid selection process, have also been approached to see whether they are interested.

Los Angeles is seen, though, as the only realistic contender to replace Boston following the USOC's decision to withdraw its backing for their campaign yesterday after the city's Mayor Marty Walsh announced he could not support the bid if that meant signing a host city contract now.

Los Angeles had been surprisingly overlooked in January when the USOC chose Boston from a shortlist that also included San Francisco and Washington D.C.

Garcetti, however, is ready for his city, currently hosting the Special Olympics, an event involving 7,000 athletes with intellectual disabilities from 177 countries, to step in and become the USOC candidate.

He believes that, unlike Boston where public opposition to the campaign was over 50 per cent in the last poll, citizens in Los Angeles would back a bid.

Initial polling in Los Angeles last autumn, before Boston was chosen, showed an approval rate in the mid- to high 70 per cent range.

"I continue to believe that Los Angeles is the ideal Olympic city and we have always supported the USOC in their effort to return the Games to the United States," Garcetti in a statement.

"I would be happy to engage in discussions with the USOC about how to present the strongest and most fiscally responsible bid on behalf of our city and nation."

Any bid from an American city would need to be ready to declare its interest by September 15, the deadline set by the IOC for cities to put themselves forward.

Boston's withdrawal was not discussed by the IOC at its ruling Executive Board meeting here today but its President Thomas Bach made it clear he would still welcome a bid from the United States.

"For the IOC this was always about an American bid put forward by the United States Olympic Committee," he said.

"This Invitation phase is also an opportunity to determine which city will eventually be chosen by an NOC (National Olympic Committee).

"We are confident that USOC will choose the most appropriate city for a strong US bid."

The host city for the 2024 Olympics and Paralympics is due to be chosen by the IOC at its Session in Lima in 2017.

Toronto are believed to be on the verge of launching a bid following the success of the Pan American Games, which finished there on Sunday (July 26).

Baku could also be a contender having staged the inaugural European Games last month.