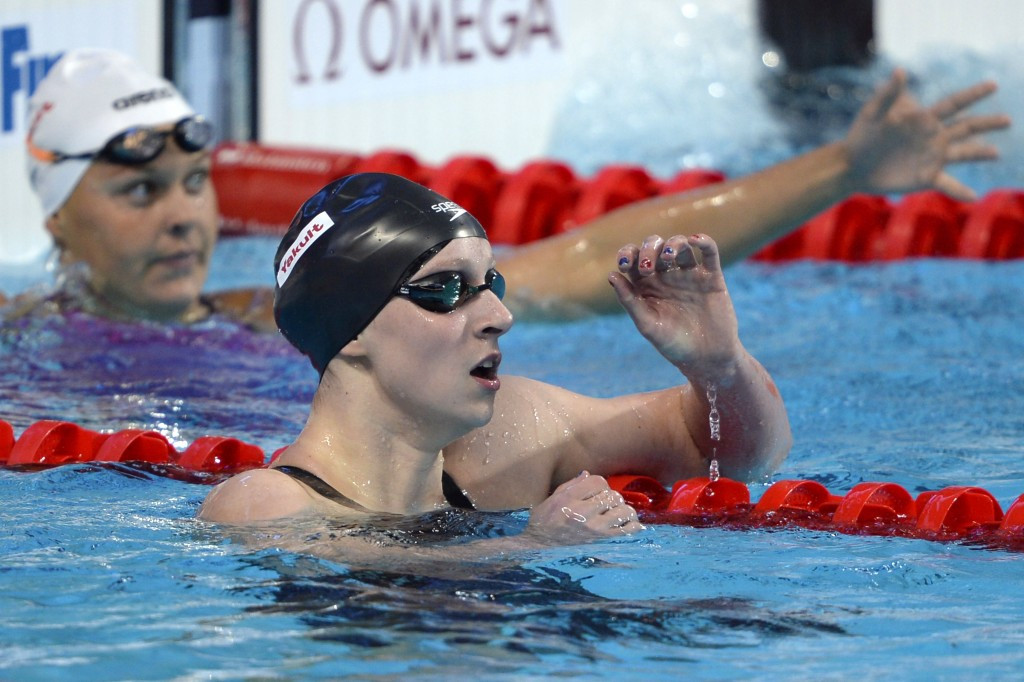 America's Katie Ledecky had an ideal start to the defence of her four titles by successfully retaining her women's 400 metres freestyle crown at the International Swimming Federation (FINA) World Aquatics Championships in Kazan.

The 18-year-old from Maryland led from the start of the race in the Kazan Arena and her split time of 1min 57.13sec at the halfway mark put her on course to break the Championship record of 3:59.15, held by Italy’s Frederica Pellegrini.

Ledecky, the Olympic 800m gold medallist, was able to claim the record by just 0.02 seconds as the 18-year-old posted a winning time of 3:59.13, 3.89 seconds clear of her nearest challenger, The Netherlands’ Sharon Van Rouwendaal.

The men’s 400m also saw a repeat winner from the Barcelona 2013 World Championships as China’s Sun Yang, who served a three-month doping ban in 2014 following a positive test  for a banned stimulant, retained his title.

Sun swan nearly two seconds faster than he had managed two years ago, stopping the clock in 3:42.58.

Another man to make improvements from the 2013 final was Britain’s James Guy, who had finished eighth on that occasion.

Guy was able to push Canada’s Ryan Cochrane into the bronze medal position, as the double gold medallist at last month’s Pan American Games in Toronto touched the wall in 3:43.75.

The 400m events were the only two individual finals of the evening, but Sweden’s Sarah Sjostrom provided a highlight when she broke the women’s 100m butterfly world record, winning her semi-final in 55.74sec, 0.24 seconds faster than the previous mark set by America’s Dana Vollmer at London 2012.

The medal action was not finished in the pool for the day though, as Australia’s Emily Seebohm, Emma McKeon, Bronte and Cate Campbell combined to claim victory in the women’s 4x100m freestyle relay in 3:31.48.

Their quartet, who set the world record at the Glasgow 2014 Commonwealth Games, finished 2.18 seconds clear of a Dutch team which included 15-year-old Marrit Steenbergen, who had earned gold in the women’s 100m freestyle event at the 2015 European Games in Baku.

The final day of diving kept to the same script as previous days with China emerging victorious again, led by Olympic silver medallist Qiu Bo, who successful defended his 10m platform title, posting a score of 587.00.

It saw him finish ahead of London 2012 Olympic champion David Boudia, who could only post a score of 560.20, while after receiving 537.95 points, Britain’s Tom Daley was third.

Earlier in the day, 339.90 points had proved enough for Han Wang and Hao Yang to win mixed 3m synchronised springboard gold ahead of Canada’s Jennifer Abel and Francois Imbeau-Dulac, who scored 317.01.