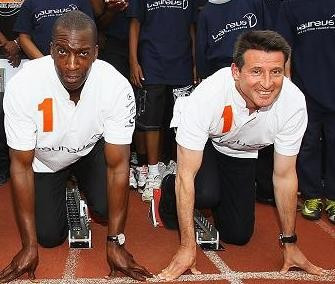 American Michael Johnson will be part of a new Values Commission created to help ensures young athletes are aware of the dangers of banned performance-enhancing drugs if Sebastian Coe is elected President of the International Association of Athletics Federations (IAAF), it was revealed today.

Coe will pledged to create the new body to help support and guide athletes, particularly teenagers, when confronted with dangers such as illegal betting and nationality or age manipulation, as well as doping.

The Commission would comprise world-leading experts in integrity, security and anti-doping, as well as respected current and former athletes and coaches, the double Olympic 1500 metres gold medallist promised.

Among its specific roles would be to monitor integrity developments and challenges in athletics and sport more broadly and develop an integrity code of practice for athletes and coaches to sign up to.

It would also define the values that should underpin athletics and the IAAF and work with Member Federations to embed and promote these values.

It would also advise on the development of online and other educational materials to help promote positive behaviour across the IAAF family, and to instil appropriate values early in an athlete’s career.

A significant role of the new Commission will be to create a values template that will inform IAAF decisions on the awarding of major events.

“Good coaching is not just about the dissemination of technical know-how," said Coe, currently in Colombia where he is attending the IAAF World Youth Championships in Cali, along with his rival for the President's job, Ukraine's Sergey Bubka.

"It’s also about creating a moral framework for athletes, particularly those in their formative years. Good coaches of course do this.

"However, the creation of a Values Commission can help in this process and will help raise standards and build on best practice in our sport.

“Good corporate governance is not itself enough to deal with the challenges that sport has to deal with.

"I want to be proactive and help support young athletes set out a route map based on values that can guide them away from malign influences.

"I also hope that, in doing so, we can help harness the power of athletics for wider social benefit."

Coe added: "I want the IAAF to lead by example.

“I see this Commission as a priority if I am elected as President and will ensure that its membership is drawn from experts both within and outside our sport.

"I plan to make further announcements about Commission membership in the coming weeks as I set out its scope to the athletics family."

Johnson, a four-time Olympic gold medallist, is the latest high-profile name in athletics to back Coe's campaign to replace Lamine Diack as President of the IAAF when he steps down after 16 years at the world governing body's Congress in Beijing on August 19.

“I fully support the creation of an IAAF Values Commission and I’m delighted to help Seb Coe turn it into a reality if he is elected IAAF President next month," said Johnson, who also won eight World Championship gold medals during his career.

"This is something that is long overdue in our sport and I believe it will make a real difference in helping young people starting out in ahletics make the right ethical decisions, both in and outside the sport.”

Coe has released a IAAF Values Commission terms of reference.pdf laying out how the new group will operate.