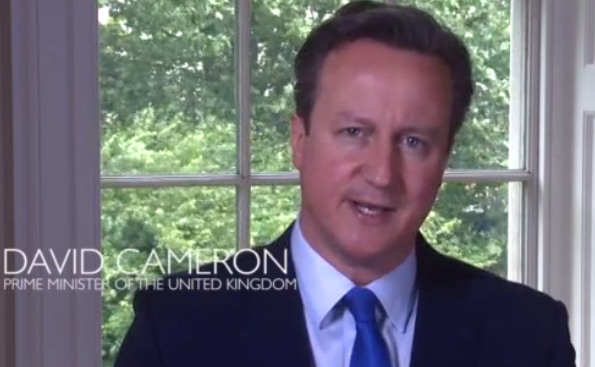 The film, produced by FilmNova Sport Production, one of Britain’s leading independent sports producers, features footage of Coe training as a young athlete and him revisiting the Olympic Stadium on the Queen Elizabeth Olympic Park.

"As the Olympic champion who delivered 2012, our greatest Games and as the man who is ensuring its legacy, Seb is the man everyone wants to lead their team," said Cameron in a message recorded at Downing Street, his official residence in London.

“If you think of what Seb has done for Britain and for sport, just imagine what he could do for athletics across the world.

"That’s why I wish him the very best as he goes for gold yet again.”

Cameron is a member of the Conservative Party, the group that Coe represented during his five-year spell as a Member of Parliament between 1992 and 1997 and who he continues to represent in the House of Lords.

There is also backing in the film from Yelena Isinbayeva, which is surprising because, as a two-time Olympic pole vault champion and multi world-record holder, she would have been expected to back Coe's rival in the election, Sergey Bubka.

“He understands the need to empower the Federations to allow more athletes globally to fulfil their potential," she said of Coe.

"I think he can do a lot because he is very smart, he is intelligent and has a lot of connections.”

Among the athletes backing Coe in the film are Ethiopia's Haile Gebrselassie, the two-time Olympic 10,000 metres champion and former world record holder for the marathon.

"He knows how to create athletes because he himself was an athlete and he knows how to bring in sponsors – without money you cannot do anything," he said in the interview.

Gebrselassie is joined by David Rudisha, the Kenyan who broke the world 800m record when winning the Olympic gold medal at London 2012, a performance Coe claimed was his favourite moment of the Games.

Also speaking out in support for him is Britain's Jessica Ennis-Hill, winner of the heptathlon at London 2012.

"The most impressive thing about what Seb Coe did with the London Olympics was making sure that the Stadium was packed from sunrise until sunset - people were there all the time," said Adams.

“I am very grateful to Haile Gebreselassie, David Rudisha, Yelena Isinbayeva, Jess Ennis-Hill, Valerie Adams and British Prime Minister David Cameron for taking the time out of their very busy schedules to offer their support to my campaign to become IAAF President," said Coe.

"I am deeply touched that I have the support of such inspirational athletes and the Prime Minister.

A successor to Lamine Diack, who is stepping down as President of the IAAF after 16 years, is due to be elected at the IAAF Congress in Beijing on August 19.

“For as long as I can remember, athletics has been at the centre of my life," said Coe.

"It is the reason that I care so much about athletes of the past, present and the future and it is why I am running for the position of IAAF President.

"To have the support of such incredible and well respected athletes really means a great deal to me.

“With just six weeks to go until the IAAF election, I am continuing to speak to Member Associations across the world about their priorities for our sport.

"I am more convinced than ever that we are on the verge of a new golden era for athletics if we embrace the opportunities together and not shy away from embracing change where needed.”