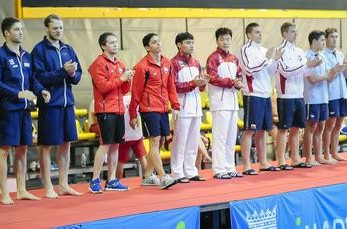 China’s continued dominance was once again on show as they claimed seven of the eight gold medals on offer at the International Swimming Federation (FINA) Diving Grand Prix in Madrid.

Andrej Rzeszutek was the only non-Chinese athlete to stand on top of the podium in the Spanish capital, the Polish diver producing a series of excellent dives in the 3 metre springboard competition.

The 2009 European junior silver medallist had qualified in first for the final and continued his good form by receiving 426.15 points from the judges, with Austria’s Constantin Blaha producing a much improved performance than the semi-final to claim silver with 420.65.

China’s Wei Zhong, given a three month doping ban in 2013 having test positive for diuretic Probenecid, secured bronze on 411.40.

He will have been disappointed with his overall performance, though, having scored higher marks in the preliminaries and semi-finals with 417.45 and 413.40 respectively.

The best reflection of the gulf in class between China’s divers and the rest of the world was in the men’s synchronised platform event where Huang Zigan and Cao Lizhi produced a stunning display to finish well clear of the field.

The two divers failed to score below an eight on any of the judges’ scorecards throughout the competition to emerge as clear winners on 438.09 points, with Norway’s Espen Valheim Filip Devor second, but more than 100 points behind the Chinese pairing with 333.15.

Yaying Ding and Siyu Ji secured victory in the equivalent women’s competition, achieving a total of 313.38 points, while Dongjin Jia and Zhihuan Xu ensured China took gold in all four synchronised events, beating The Netherlands’ Inge Jansen and Uschi Freitag with a score of 326.10.

Canadian champion Celina Toth secured her first podium finish on the Grand Prix circuit as she claimed bronze in the women’s 10m platform with a score of 318.00, although it was not enough to challenge Siyu Ji and Miya Suo of China who finished on marks of 372.45 and 356.95 respectively to occupy the top two places.

The final golds of the fifth leg of the Grand Prix were awarded to Zhihuan Xu and Bowen Huang of China as they posted secured comfortable victories in the women’s 3m springboard and men’s 10 platform.

The next leg of the Grand Prix is due to take place in Italian city Bolzano from next Friday (July 3) until Sunday (July 5).