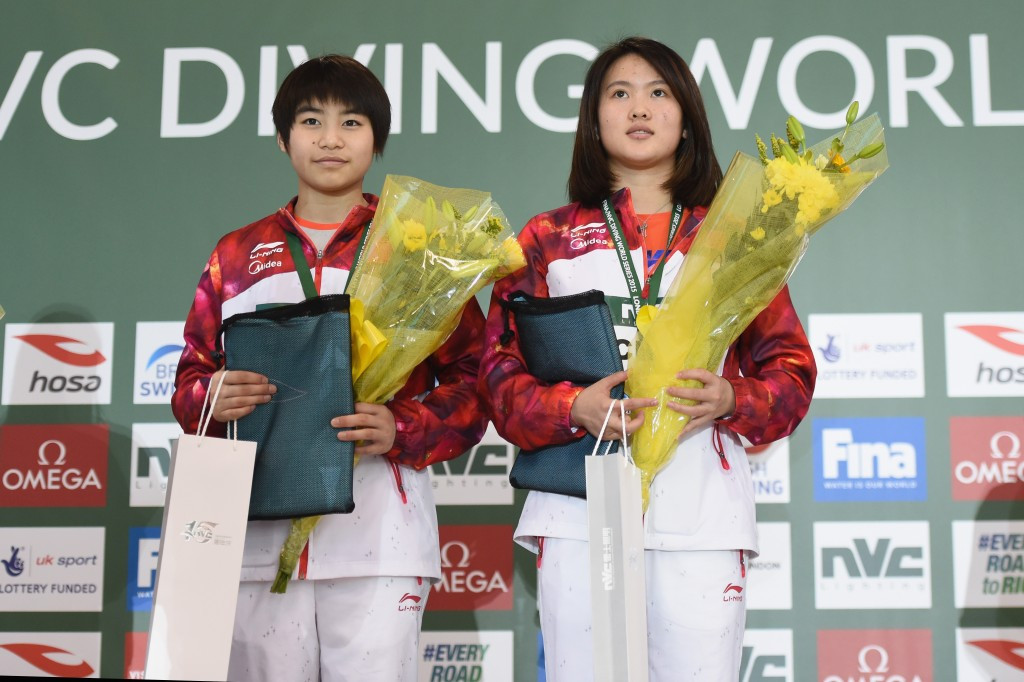 China secured a clean sweep of gold medals on day one of the International Swimming Federation (FINA) Diving World Series event at the London Aquatics Centre.

Success for the men and women in both the 3 metres synchronised springboard and 10m synchronised platform saw China repeat their achievements from the three previous Diving World Series events this year in Beijing, Dubai and Kazan.

Qin Kai and Cao Yuan took the men’s 3m synchronised springboard title with a score of 447.75 points, and were followed onto the podium by Great Britain’s Jack Laugher and Christopher Mears, and Russia’s Ilia Zakharov and Evgeny Kuznetsov in second and third respectively.

Home favourites Laugher and Mears produced the dive of the competition, a forward four-and-a-half somersault in the tuck position, to add 95.76 points to their total of 433.80 points, while Zakharov and Kuznetsov took bronze with 429.21 points.

Despite China’s victory, Qin admitted their final four-and-a-half somersault was “less than ideal”.

"It was me that made the mistake," said Cao.

"I need to continue training to improve it."

Shi Tingmao and partner Wu Minxia, who became the first female diver in history to win gold in the same event at three consecutive Olympic Games when she took the 3m synchronised springboard title  in 2012, led throughout the equivalent women's event, finishing with 331.50 points.

Italy’s Tania Cagnotto and Francesca Dallape claimed silver, their first medal of the series, with 314.40 points, while bronze went to Canada’s Jennifer Abel and Pamela Ware with 295.68 points.

Earlier in the day, Chen Ruolin and Lui Huixia led from the outset in the women’s 10m synchronised platform to win with 332.88 points, nearly 18 points ahead of the Malaysia’s Jun Hoong Cheong and Mun Yee Leong who took silver with 314.94.

"Like every sportsperson it’s not about the points, it’s about the winning," said Chen.

"You need to make sure every dive is right."

Britain’s Tonia Couch and Sarah Barrow had to settle for bronze, their second of the Diving World Series following a third-place finish in Kazan, with 311.88 points.

As for the men’s event, Lin Yue and Chen Aisen headed the standings after the first round and never looked back, scoring 474.84 points.

"I was satisfied with my first few dives, but I need to improve the last few," said Lin.

"The only way to do this is to make sure I’m prepared every single day."

Germany’s Patrick Hausding and Sascha Klein secured silver after scoring 84.24 points from their last dive, a back two-and-a-half somersaults with two-and-a-half twists.

Their total of 427.02 points was more than six points better than that of Mexico’s German Sanchez and Ivan Garcia, who took bronze with 420.78.

The action in London continues tomorrow.