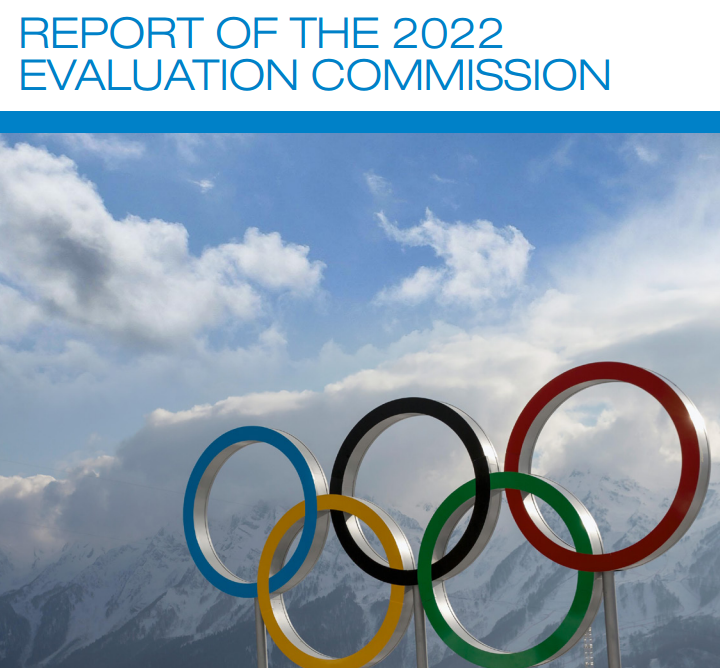 Beijing's complete reliance on artificial snow and Almaty's dependence on economic stability in order to afford the Games have been highlighted as concerns in the International Olympic Committee (IOC) Evaluation Commission report released today on the two-horse race for the 2022 Winter Olympics and Paralympics.

The 137-page report, the first produced since the unanimous acceptance of the IOC's Agenda 2020 reform process, aims to be more specific in outlining risks and opportunities of differing strands of the two bids, with independent, third-party perspectives having been consulted on aspects including human rights in the two Asian nations.

There are no major surprises with regard to either city, with the reports stressing the respective strengths of each; namely Almaty's compactness and strong venue plan and Beijing's reliability and experience from past Games.

But no punches are pulled on respective weaknesses, with concerns over China's lack of snow and consequent atmospheric and environmental risks the most hard-hitting element.

Both the Zhangjiakou and Yanqing zones, the two mountain clusters where skiing and sliding events would be held, have "minimal annual snowfall and for the Games would rely completely on artificial snow".

"There could be no snow outside of the [proposed Alpine skiing] racecourse, especially in Yanqing, impacting the visual perception of the snow sports setting," the report adds.

The report, produced by the 11-strong Commission chaired by Russia's Alexander Zhukov following week-long visits to both cities earlier this year, then highlights planned measures to alleviate the lack of natural snow, speculating how Chinese organisers have underestimated how much water would be required to manufacture it artificially.

After outlining how the region is subject to "severe water stress" as a result of "climate change, intensive industrial and agricultural use and domestic demand", concerns are expressed over how "established reservoirs" will be exploited to generate snow, which are also vital for the local population.

This follows reports in recent weeks claiming locals do not have access to local reservoirs because supplies are used instead to manufacture snow for the increasing number of resorts to the north of Beijing, something denied by the Bid Committee, who claim the Chinese Government have strict measures in place to control and manage water use, especially in Beijing and Zhangjiakou.

"Beijing 2022 presented studies indicating that shifting from agriculture and industry to a tourism-based economy would reduce overall water demands in the region," the report explains.

"The studies suggest that the switch to tourism would not have any net impact on water resources over time.

"However, it is a complex situation, and it is extremely difficult to reconcile such anticipated high levels of economic development with the continuing effects of climate change and increasing aridity across the region.

"The mountain venues would rely completely on artificial snowmaking for the Games.

"The Commission considers Beijing 2022 has underestimated the amount of water that would be needed for snowmaking for the Games but believes adequate water for Games needs could be supplied."

Photos provided of both cities, included in an appendix, show a clear contrast between the snow of Almaty and the barren and arid - but almost completely snowless - nature of Beijing.

Approximately 1,500 residents would be forcibly relocated in order to develop the Games-dependent ski jumping venue and the Olympic Village in the Zhangjiakou Zone, it was explained, something that had not been made clear before, with the State Government reportedly offering these residents either relocation options or cash incentives.

Concerns on how "warmer temperatures in mid-March" could have impacts on the field of play during the Paralympic Games, is also highlighted, although it appears possible the latter Games could be held earlier than their traditional slot to alleviate risks.

But the report also makes clear many of the strengths of the Chinese bid, which aims to follow the success of the 2008 Summer Games, including full Government support, delivery certainty due to a "stable, resilient and diversified" Chinese economy, and a "sustainable delivery concept".

In comparison Almaty, in many ways a polar opposite of Beijing's bid, is praised for its venue plans while concerns are expressed about its implementation capabilites.

The compact concept and venue plan would provide a "good athlete experience, operational and cost efficiency and low environmental impacts", it is explained, with the venue changes made following the IOC Evaluation Commission inspection praised.

One concern involves the proposed sliding track, for which a planned completion date just 16 months before the Games would present a challenge in terms of "homologation, testing and familiarisation".

Although full Government support is praised, something which Kazakhstan have appeared less strong in projecting in comparison with the Chinese, it is repeatedly highlighted how "market forces" could affect the effectiveness of plans, while the oil-rich nation is also dependent on wider forces to the extent that the "budget presents risks".

"Economic factors, including low oil prices and exchange rate issues, could negatively impact Games preparations and the Government’s capacity to provide financial and other support," the report adds.

"The expense side of the OCOG (Organising Committee) operational budget requires further development and alignment with operational planning.

"Combined with revenue uncertainty related to ticketing and sponsorship, the budget presents risks.

"Reliance on the private sector for the delivery of Olympic Villages, the Media Village and IOC group hotels creates a risk if market factors change.

"However, this is balanced by an underwriting provided by the City of Almaty for the 'Olympic City' developments - the budget would be strengthened if more developed venue use agreements were in place for competition venues and critical non-competition venue.

One particular concern relates to hotel accommodation, with the Bid Committee not having provided "any guarantee from individual private hotel owners with regard to room availability or price".

"Were Almaty to be awarded the Games, this would create significant risk to the OCOG’s ability to both secure needed rooms and ensure reasonable rates," it is claimed.

Both cities receive similar feedback on other factors, with environmental factors raised in relation to Almaty as well as Beijing, while air pollution is also raised as a challenge for both cities.

The affordable budgets produced by both bids is praised by the Commission, something the IOC will be keen to promote following the widely reported expense of last year's Games in Sochi.

But, while Almaty have pledged to include every bit of wider spending within their Bid, the Commission does observe how some aspects are omitted from Beijing's wider spending cost, such as the high speed railway which will link the three venue clusters.

It does not include "capital investment in transportation and other infrastructure for planned long-development, such as the high-speed rail link between Beijing and the mountain venues", the report explains.

This railway, expected to be finished regardless of the bid being successful by 2019, is a major part of Beijing plans, although it was not included in the budget as it was part of a wider Chinese railway project, of which the cost has not been released, officials have repeatedly claimed.

Journey times over the 190 kilometres distance from Beijing to Zhangjiakou should be reduced from three hours by car to less than an hour on the new line, it has been promised, although some scepticism about that is expressed in the report.

"Beijing 2022 confirmed during the Commission’s visit that approximately 10 minutes would need to be added to these times to account for waiting times," it is written.

"The Commission believes that transfers and waiting times could further extend the travel times under some circumstances."

With regard to human rights, a perceived challenge for both prospective hosts, the Commission "considered statements and opinions in independent third-party reports with regard to environmental protection, the treatment of detainees, media freedom, Internet access, the right to demonstrate, and the integrity of the judicial and electoral systems".

This was raised with Bidding Committees and Government authorities, with assurances provided that the "Host City Contract and the Olympic Charter would be respected for all participants of the Olympic Games and in Olympic related matters".

At the same time, the IOC "has to respect" the laws of a sovereign state, it adds, something which also created controversy ahead of Sochi 2014.

It remains to be seen to what extent the report will affect voting IOC members, with Beijing widely considered the comfortable favourite in the two-horse race, a distinctly low-key one since the withdrawal of European contenders Stockholm, Kraków, Lviv and Oslo.

Both cities will present to the IOC at a Candidate City Briefing in Lausanne on June 9, before further presentations will be made the following day.

A final decision is then due at the IOC Session in Kuala Lumpur on July 31.

The full Evaluation Commission report can be read below.