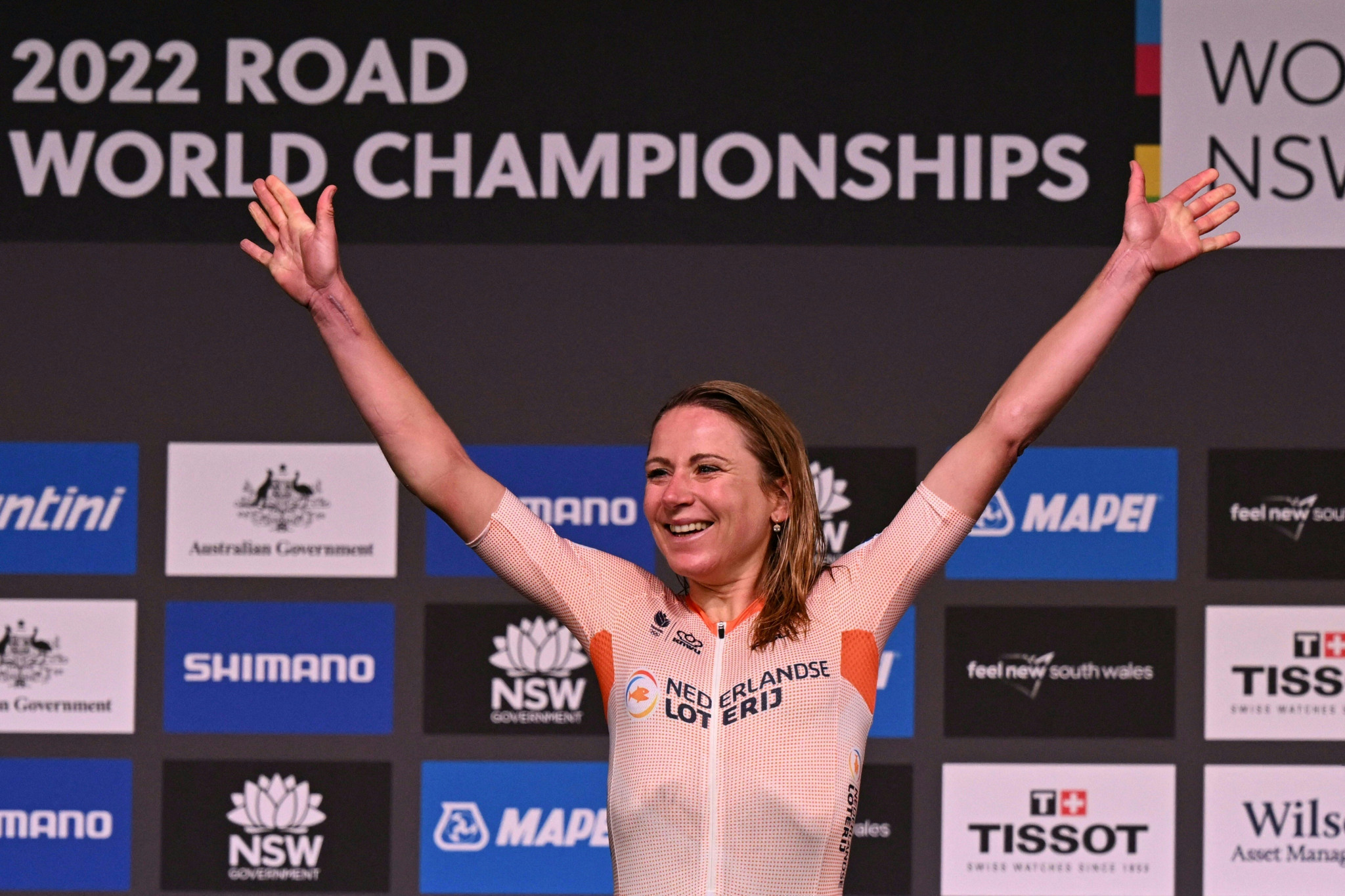 The 39-year-old Dutch rider, who sustained her injury in a crash during the mixed time trial on Wednesday (September 21), attacked from behind to win the second world road title of her career, producing an irresistible surge over the final 500 metres.

The 164.3km course started up the coast in Helensburgh and involved an early mountain test in the 8.7km-long Mount Keira before six concluding laps of the undulating Wollongong circuit.

"It was hell," said Van Vleuten after finishing in 4hr 24min 25sec, one second clear of the pack.

"I could not go out of the saddle so I had to do everything seated and my legs were exploding on the climb.

"I wanted to attack on Mount Keira before I broke my elbow.

An attack for the history books ?

"We had only Marianne [Vos] as the leader and I just was the domestique today.

"I still cannot believe it.

"I was waiting until they come with the sprint over me, but they didn't catch me."

Lotte Kopecky of Belgium finished second, striking down on her handlebars in frustration as she crossed the line, and third place went to Silvia Persico of Italy.

The win extended what has been an outstanding sequence of results for van Vleuten, who won road race silver at the Tokyo 2020 Olympics.

Earlier this year she won the Giro d’Italia Donne, Tour de France Femmes and Ceratizit Challenge by Vuelta a España.

The first rider under the age of 23 to cross the line was 22-year-old Niamh Fisher-Black of New Zealand, who earned herself the world title in that age category.

Britain's Pfeiffer Georgi took silver in the under-23 race, while Ricarda Bauernfeind of Germany was third fastest.

Earlier in the day Welsh rider Zoe Bäckstedt earned herself the ideal 18th birthday present as she retained her junior women’s road race title, breaking away from the field on a descent after just quarter of an hour and powering to victory over the 67.2km course.

Elsewhere in the junior events the men’s under-23 title went to Kazakhstan’s Yevgeniy Fedorov, who finished a 169.8km course in 3hr 57.08sec, one second clear of a chasing pack led by Mathias Vacek of the Czech Republic and men’s under-23 time trial champion Soren Waerenskjold of Norway, who took silver and bronze respectively.

The men's junior road race title went to Germany's Emil Herzog, who won the sprint at the end of a 135.6km course from Portugal's Antonio Morgado and bronze medallist Vlad van Mechelen of Belgium.