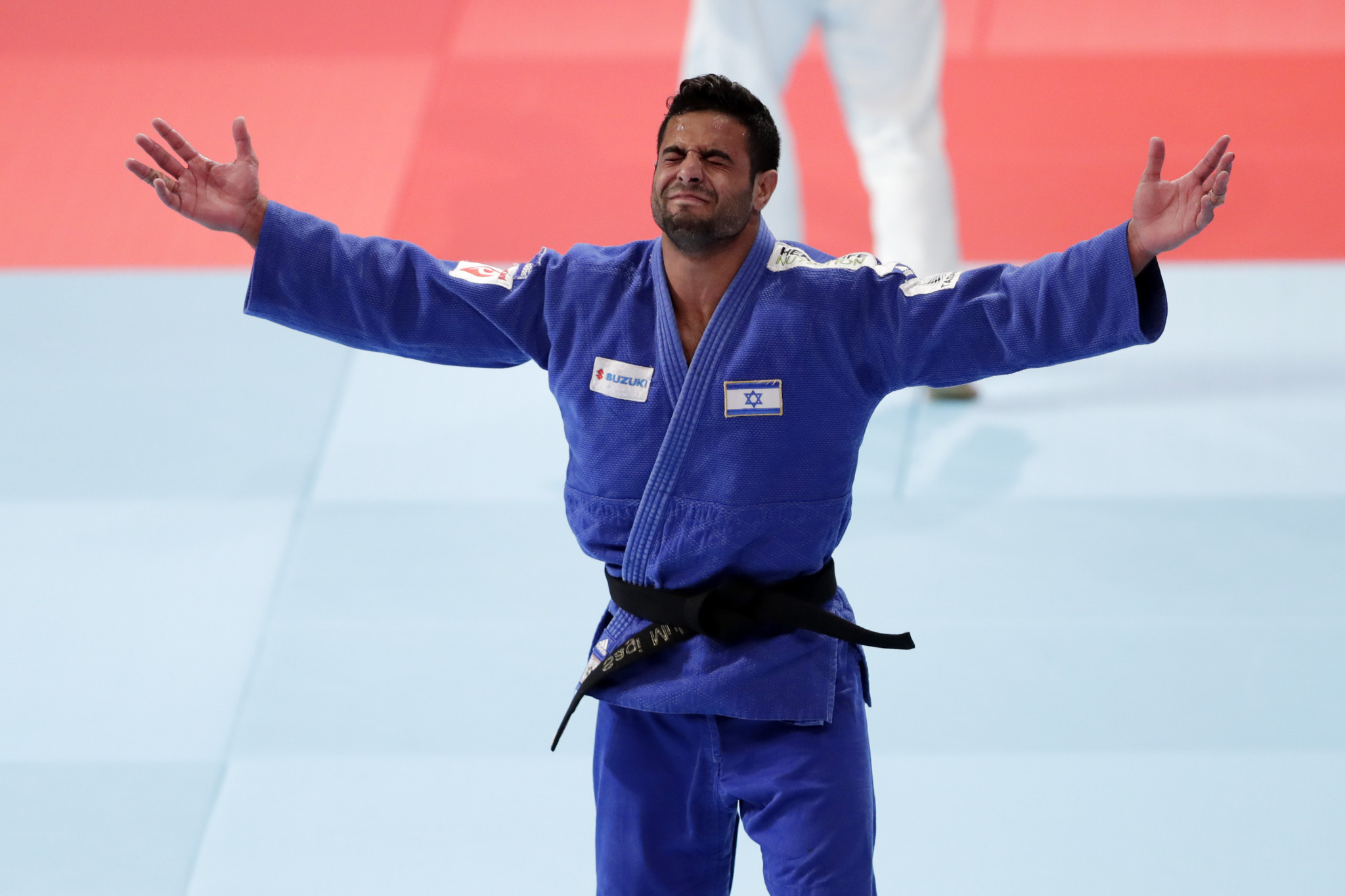 Reigning champion Mollaei looked unstoppable in the preliminaries, but claimed to have suffered a head injury and there were doubts he would even take to the tatami for the evening session.

Mollaei, who is Iranian, has previously withdrawn or claimed injury in order to avoid facing Israeli judoka Muki, given the political and diplomatic tensions between the two nations.

After Muki narrowly won his semi-final against Egypt's Mohamed Abdelaal, Mollaei appeared for his clash with Matthias Calle of Belgium wearing a huge bandage on his head, and barely attempted a throw during the bout, before being thrown for ippon by Calle's first real attack.

Mollaei was similarly unimpressive in his bronze-medal match, losing to world number 29 Luka Maisuradze of Georgia.

In the final, 2019 European Games champion Casse began on the offensive and attempted a sutemi-waza sacrifice technique, with Muki rather flat and defensive.

However, he raised his game with 90 seconds left and earned a waza-iri with an arm throw on the counter-attack, before completing the win shortly after.

Muki - who spoke with Israeli Prime Minister Benjamin Netanyahu on the phone after his victory - was visibly thrilled at his maiden IJF world gold, leaping into the air before falling to his knees in delight.

"I missed the European Championships to be fit for this so I am very happy," he said.

"I am very happy that everything was connected in this day for me.

"I am the first world champion from Israel, so it is a very special moment for me and my country.

"Being world champion brings a lot of expectations for the Olympics, so I have one year to concentrate and train.

"The Israeli crowd was also there screaming, which gave me the energy to move and not give up, they came a long way for me.

"Judo is a little sport in Israel, so every medal of this kind makes a lot of noise."

The other bronze medal went to Antoine Valois-Fortier, the world number 12 from Canada.

In the women's under-63 kilogram final, Clarisse Agbegnenou won her fourth World Championships gold after a thrilling final victory over Miku Tashiro, with the bout lasting more than 10 minutes and bringing a standing ovation from the crowd.

French star Agbegnenou, winner in 2014, 2017 and 2018, blitzed her way through the preliminary stages and won her three early fights in less than two minutes combined.

But she was certainly tested by Japan's Tashiro, roared on by a sadly half-full crowd at the Nippon Budokan.

Agbegnenou was more attacking in the early stages, but Tashiro refused to back down and looked to gain confidence as the match went to golden score.

Both traded every technique in the book, and Agbegnenou was visibly tired before managing to throw Tashiro and win her third world crown in a row.

"It''s crazy, I cannot even think, I am so happy," she said after her victory.

"When you see me fighting in the morning it looks easy, but I knew the semi and final would be tough.

"I saved for the semi and final but it was crazy, I was so happy to fight Tashiro, and I want to thank her.

"I respect her, we learn from each other, she is so peaceful - I think we can go far and prove to everyone that this division has big fighters.

"For some years that was the biggest and toughest fight I have had, but it proves that the under-63kg category is the very best.

"I won with my head because my body did not want to.

"I was seeing the time, I was thinking 'shit, I am getting tired', but I knew I had to do it for me, I could not give up so I went on to the end.

"I did not know if I threw her, I just looked at the referee and he gave waza-iri.

"I really like Japan, the crowd is really good, and now I know what I have to do, I know where I have to fight next year.

"I look at everything to be prepared for the Olympics next year."

Bronze medals went to Juul Franssen, who beat Dutch team mate Sanne Vermeer, and Germany's Martyna Trajdos, who won by default after Slovenia's Tina Trstenjak was disqualified for attempting an illegal move in her semi-final against Tashiro.

Action continues tomorrow with the men's under-90kg and the women's under-70kg categories, with insidethegames providing live coverage of all the results from Japan.