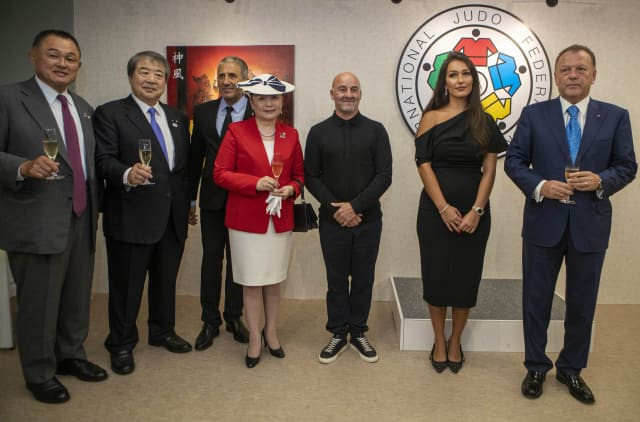 A special art exhibition is being held at the famous Kōdōkan during the International Judo Federation (IJF) World Championships here.

The exhibition at the headquarters of the worldwide judo community was opened by IJF President Marius Vizer, with Her Imperial Highness Princess Tomohito of Mika in attendance.

It will remain open until the end of the Championships on Sunday (September 1).

Porcelain artware from IJF sponsor Herend is also being exhibited.

An art exhibition alongside the IJF World Championships is set to become a regular feature of the event, having first been held at the 2017 edition in Budapest and last year in Baku.

The Kōdōkan was founded in 1882 by Kanō Jigorō, the founder of judo, and a number of his personal items are on display alongside the exhibition.

The decision to hold the event at the Kōdōkan is especially exciting for Eckersley, winner of an Olympic bronze medal in the extra lightweight category at Los Angeles 1984.

"After Baku, I'm more than happy to be able to show my work to the judo family again," the 55-year-old, who now lives in Norway, said.

"I first came to train at the Kōdōkan when I was 17 years old, and to imagine many years later that I was exhibiting some of my artwork is pretty amazing.

"I have to pinch myself.

"When I found out the exhibition was going to be in the Kōdōkan, it's a dream come true for me.

"There is a similarity with the sweat on the tatami and the sweat I put into these paintings.

"It's really weird because I got the same nervous feeling coming to the dojo to train and coming to this exhibition.

"Because when you create a piece of art it's there to be looked at, to be viewed, to be discussed.