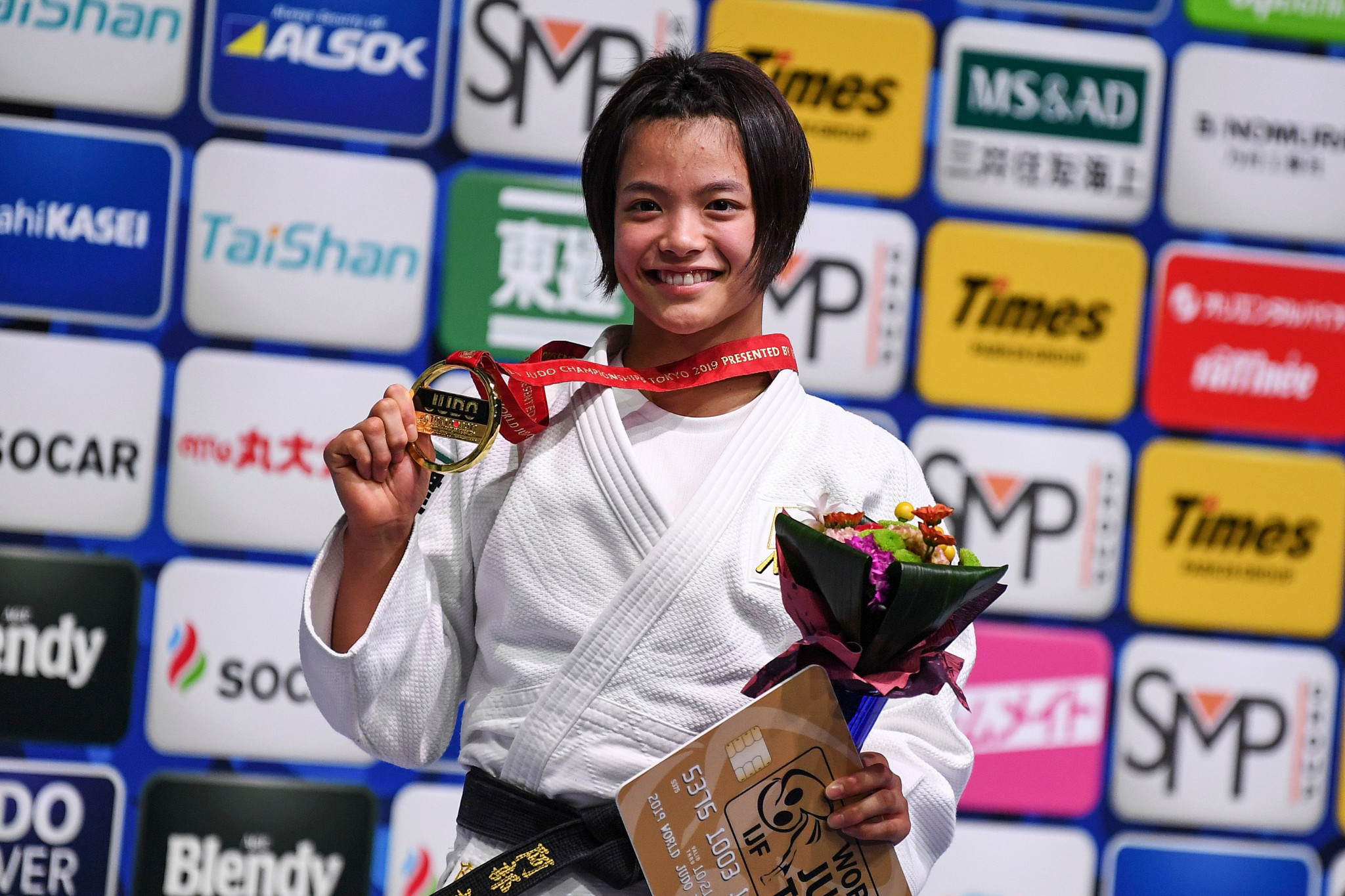 Hosts Japan won both gold medals on offer on the second day of the International Judo Federation (IJF) World Championships in Tokyo.

Uta Abe won her second successive title in the women's under-52 kilograms category, beating Russia's Natalia Kuziutina with an ippon throw after just 29 seconds of the final.

It sends Japan straight to the top of the overall medal table after they missed out on gold on the opening day of the tournament here at the Nippon Budokan.

In the women's division, Abe had looked strong all day before she fought Kosovo's Olympic champion Mejlinda Kelmendi in the semi-final.

It was the first time the two judoka had ever met in major competition and it was one of the best bouts of the competition so far.

Both fighters took turns being on the front foot and on the defensive, with Abe nearly taking the win in the final seconds of regulation time before entering the golden score period.

The two judoka had both brought their A-game, but Abe narrowly got the better of the Kosovan, reacting quickest after a failed sweep to pin the Rio 2016 champion.

In the final, Abe showed perfect technique to almost hoist Kuziutina in slow motion, and inexorably threw her opponent for ippon inside half a minute.

"I am so pleased to win this competition in Tokyo, and to be double champion," she said after the medal ceremony.

"I would be lying if I said there was no pressure, I felt a tremendous amount of pressure, so I am relieved to have won.

"Before all matches and especially the final, I tell myself I will win by ippon, and my dream came true."

On the semi-final, she said: "I've been longing to fight Kelmendi for a long time, and to beat her, and it has given me a lot of confidence to win against her.

"The home crowd gave me strength to beat the opponent, I thank them for enabling this result."

Bronze went to Kelmendi, who defeated Joana Ramos in a fight disrupted for seven minutes after the Portuguese judoka suffered a broken nose.

The other bronze went to Japan's Ai Shishime who defeated top seed Amandine Buchard of France with a late osaekomi.

In the men's competition Maruyama was not the favoured Japanese fighter as reigning world champion Hifumi Abe, Uta's brother, looked unbeatable in the early stages, winning his first two fights in a combined 75 seconds.

In their semi-final, Abe started the stronger as Maruyama picked up two shido penalties, but he failed to finish the job.

The number two seed switched the momentum in the golden score period before triumphing with a self-sacrifice technique for waza-ari.

Maruyama faced world number 29 Kim in the final after the Korean enjoyed an extraordinary run through the early rounds, including a victory over top seed Vazha Margvelashvili of Georgia in round three.

Amid current political and sporting tensions between the two countries – South Korea is threatening to review plans to hold a pre-Olympic Games training camp in Japan next year because of concerns relating to radioactivity from the 2011 Fukushima nuclear disaster – Maruyama claimed a dominant victory.

"It's a first time for me to win a gold in the Nippon Budokan, and my first world title, these feats are something special to me," he said after winning gold.

"The moment I realised I won the final, I realised how many were cheering for me, and I was able to show I was number one.

Abe claimed a controversial bronze by beating Manuel Lombardo, with the Italian appearing to have a legitimate waza-ari ruled out by the video referee during the golden score period.

The other bronze went to Denis Vieru of Moldova, who defeated Mongolia's Baskhuu Yondonperenlei.

The IJF World Championships continue tomorrow with the men's under-73kg and the women's under-57kg.

Full Live Blog coverage will be provided by insidethegames for the entirety of the championships.