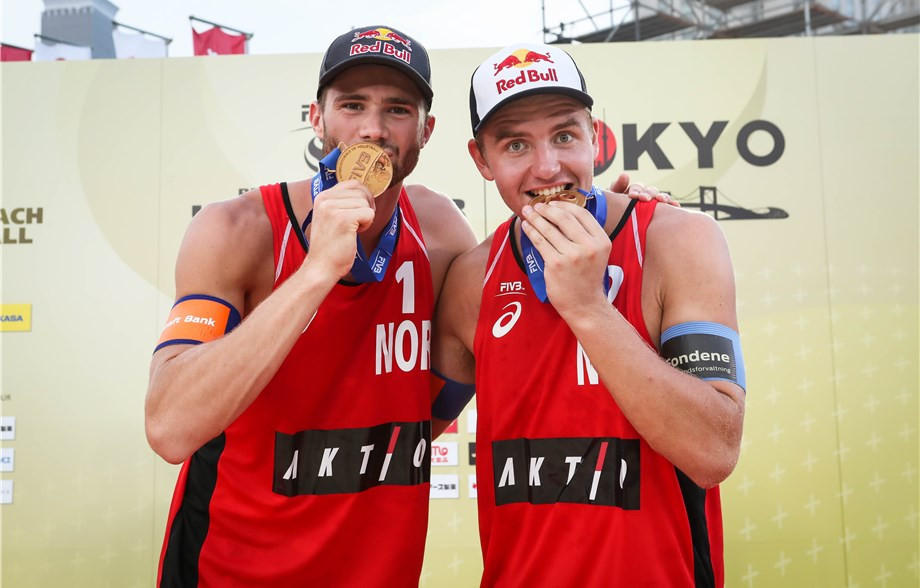 The four-star World Tour tournament in the Japanese capital was doubling as a beach volleyball test event for next year's Olympic Games and both winning pairs laid down a marker to their rivals at Shiokaze Park.

They have now won nine gold medals on the FIVB Beach World Tour from 26 starts together – the fastest any men's or women's team from Europe has reached that milestone.

In the bronze medal match, ninth-seeded Alexander Brouwer and Robert Meeuwsen of The Netherlands defeated fifth-seeded Alison Cerutti and Alvaro Filho of Brazil 21-12, 21-17.

It capped a remarkable comeback for the Brazilians who lost two of their pool games.

Klineman and Ross were playing in their third World Tour final in a row as the top seeds but came up short.

"After losing twice in the pool, we had to do something," said Bednarczuk, who won Olympic silver at Rio 2016 and the 2015 world title with Barbara Seixas.

"We had good discussions with our coaches, and we came back and played smarter.

"You saw the worst of us early, and the best of us in the last four matches.

"This is a big win for us as we are battling the other good teams in Brazil for a spot in Tokyo 2020."

All of the Olympic test events are taking place under the "Ready Steady Tokyo" banner.

According to Reuters, two people were taken ill at the tournament, including one victim of heatstroke.

The players in Tokyo have little time for rest as the prestigious Vienna Major begins on Tuesday (July 30) in the Austrian capital.