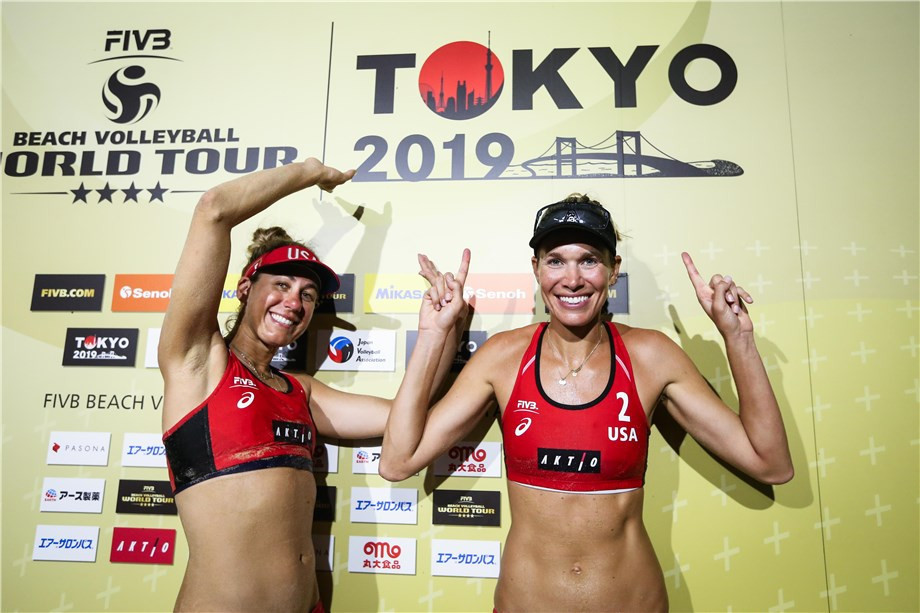 Alix Klineman and April Ross of the United States reached their third consecutive final on the International Volleyball Federation Beach Volleyball World Tour with victory over Germany's Karla Borger and Julia Sude at the Tokyo Open.

Klineman and Ross, winners of the recent Gstaad Major, recorded a 23-21, 22-20 triumph in their semi-final clash with the German pair at the competition, which is doubling as a test event for the Tokyo 2020 Olympic Games.

The American top seeds are due to go up against Brazil's Agatha Bednarczuk and Eduarda Lisboa in tomorrow's final at Shiokaze Park, the venue for the sport at next year's Olympics.

Bednarczuk and Lisboa progressed to the gold medal match of this four-star event by defeating Canada's Heather Bansley and Brandie Wilkerson 21-11, 21-12.

Both teams will be seeking their fifth World Tour title when they clash in the final.

Mol and Sørum secured the first place in the final with a 21-17, 21-17 victory over Alexander Brouwer and Robert Meeuwsen of the Netherlands.

Ehlers and Fluggen set up a meeting with the Norwegian team as they continued their fairytale run from the qualification round by upsetting fifth seeds Alison Cerutti and Alvaro Filho of Brazil 16-21, 21-19, 16-14 in their semi-final.

According to Reuters, two people have been taken ill at the tournament, part of the "Ready Steady Tokyo" test event series for Tokyo 2020, including one who suffered from heatstroke.

"As far as our first aid satation is concerned, I think we managed to make a correct judgment and provide an appropriate treatment," Tomoko Suemura, who works within the Tokyo Metropolitan Government's Games preparation department, told Reuters.

"We feel it is necessary to discuss how to deal with various medical cases in coming months."