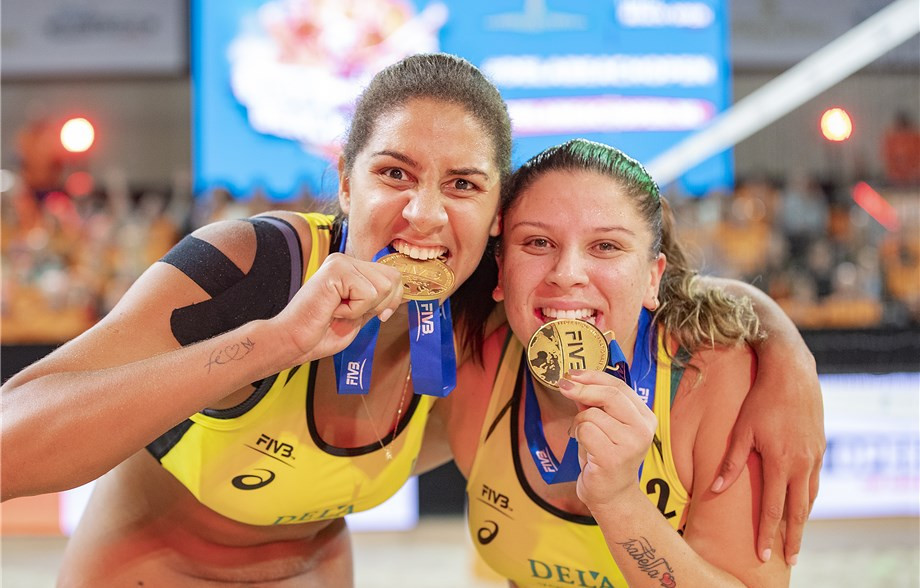 The pair beat Kelly Claes and Sarah Sponcil in the final, who were also seeking their first title, 21-10, 21-18.

"I am happy, but there are no words for this moment," Patricia said after their win over the Americans.

"It is our first gold medal in a four-star competition and today is the birthday of our coach, so it is so, so special for us."

While they had never won gold before, they did pick up a silver at the Las Vegas event in October.

Today's win also marks the third time in four World Tour competitions that they have finished on the podium, having also won the three-star event in Qinzhou in China.

With the title on the line they grabbed hold of the match early on and dominated the first set, although Claes and Sponcil did respond in the second to, at one stage at least, take control.

The Brazilians held their nerve, however, and took the title with their second match point.

While the Americans will be disappointed not to win, silver marks their second medal in three World Tour events having won bronze at Qinzhou.

The bronze this time around was won by Anniina Parkkinen and Taru Lahti-Liukkonen from Finland, who beat another US pair in April Ross and Alexandra Klineman 15-21, 21-13, 15-6.

It is the first time they have won a medal at a four-star tournament.

In the men's event Russia's team of Viacheslav Kraslinikov and Oleg Stoyanovsky claimed their first title as a pair with a straight sets victory in the final, after beating their compatriots Ilya Leshukov and Semenov Konstantin in the semis.

Russia also claimed the bronze as Leshukov and Konstantin bounced back from their earlier loss to beat the home pair of Alexander Brouwer and Robert Meeuwsen in three sets, 21-17, 14-21, 15-12.