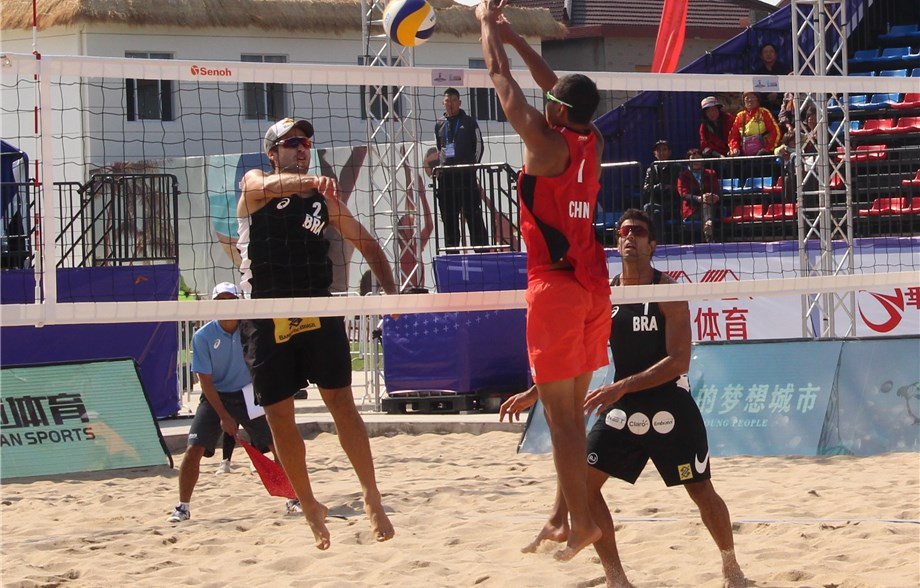 Brazil's pair of Pedro Solberg and Bruno Oscar Schmidt won both their matches today at the International Volleyball Federation (FIVB) Yangzhou Open, giving them the most successful start of all the seeds in the men's competition.

They beat the United States' Casey Patterson and Stafford Slick 21-14, 24-26, 15-12 in Pool B of the four-star Beach World Tour event, before also seeing off wildcards Li Zhuoxin and Zhou Chawei of China 21-10, 21-11 at the Yangzhou Beach Volleyball Sports Forest Park.

In contrast to the Brazilians' strong performance, the top seeds Ahmed Tijan and Cherif Younousse from Qatar lost their first match to Ukraine's Sergiy Popov and Iaroslav Gordieiev.

"Every time we play a wild card team, it's different," Bruno said.

"They have the advantage because they are used to the wind and the sand.

"Once we started playing, we saw them struggle with the deep sand, so we knew how to take advantage of it to win the match."

Other teams to win both of their matches today in the men's draw included another Brazilian pair in Gustavo Albrecht Carvalhaes and Saymon Barbosa, the US pair of Ryan Doherty and William Allen and Russia's Viacheslav Krasilnikov and Oleg Stoyanovskiy.

Doherty and Allen were granted their second win when one of their opponents was forced to retire through injury.

In the women's draw it was a better day for the top seeds.

The Brazilians Barbara Seixas De Freitas and Fernanda Alves and the second seeded US pair of Alexandra Klineman and April Ross each won tough tie break matches against Chinese opponents.

Seixas De Freitas and Alves dropped the first set in their match against Bai Bing and Yuan Lvwen, but recovered to win 19-21, 21-16, 15-11 against the Chinese duo.

"We know that the game could have been better but it's our first to play against this Chinese team, who are very young and skillful," Barbara said.

"We started with a slow rhythm in the first set - our service and defence system were not working well.

"In the second set we started to push more and our service improved, which gave us the confidence to take it to the third set."

The US pair, meanwhile, also won having lost the first set.

"They pushed us hard and we feel very lucky to get away with that match, we played a very good China team," Ross said.

"We are still getting in rhythm and there were some things that we could have done better on our side, but it came down to fighting," Klineman added.

Elsewhere, three-time Olympic champion Kerri Walsh of the US and her partner Kelly Claes won their first match 25-23, 21-13 against Jolien Sinnema and Laura Bloem from The Netherlands.

Pool play in both draws will continue tomorrow at 9am local time.