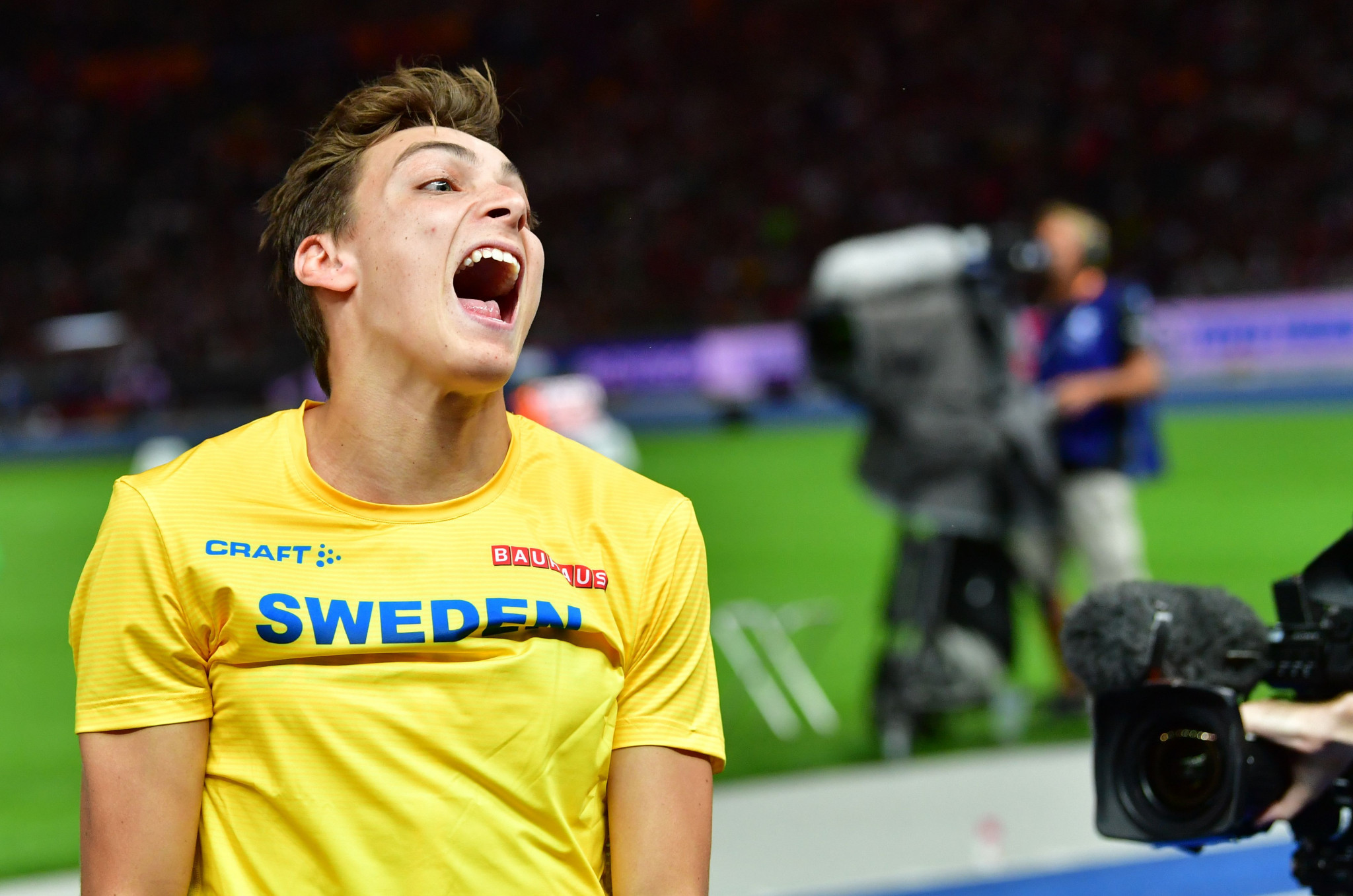 The day after Norway’s 17-year-old running phenomenon completed the 1500 and 5,000 metres double at these European Athletics Championships,

it was the turn of an 18-year-old Swede, Armand Duplantis, to send shock waves of astonishment through an Olympic Stadium which once again thundered with atmosphere as he cleared 6.05 metres to win his first major pole vault title.

Duplantis is known as "Mondo" - and he has the world at his feet after becoming the youngest male athlete to win a European Championships field event title on a night when Britain earned three gold medals through their men’s and women’s 4x100 metres teams and Laura Muir in the 1500m to top the medal table.

The Swede, who won the International Association of Athletics Federations’ World under-20 title in Tampere last month, had arrived here with what was already a prodigious personal best of 5.93.

But that went west as he produced successive first-time clearances at 5.95, 6.00 and finally 6.05 metres to simply rise above a field that contained Authorised Neutral Athlete Timur Morgunov, who took silver with a personal best of 6.00, andFrance’s 31-year-old world record holder Renaud Lavillenie, who equalled his season’s best of 5.95 to take bronze.

Lavillennie had been seeking a fourth consecutive title, but seemed genuinely thrilled at how things had turned out for the wonderboy with whom he spent 10 days training last month at his base in Clernont Ferrand.

“I do not think that there are any words in this world to describe what I feel,” said Duplantis, whose father and coach Greg, a 5.80m vaulter in his time, was attempting to control his emotions on the sidelines.

As for his son - the first two big clearances put an electric charge through him.

But after 6.05 it was as if all the energy drained from him and he simply dropped, face down, onto the landing mat.

“I am on the top of the world,” Duplantis added.

“It could not be any better.

“Renaud sent me a message this morning saying no matter what results we both meet both on the podium.

“And I really wanted to meet him on the podium tonight.

“In the competition, after I jumped six metres, I just knew I need to go higher to solve it.

“It was crazy and pretty tough for me as I just improved my PB.

“I had to switch the poles at the higher heights for the ones I have never used before in the competition.”

Once again the Olympic stadium was a roaring cavern, with 42,350 present tonight, and the action matched their anticipation as there was another rich and varied menu of athletic delights.

Sifan Hassan of The Netherlands won the women’s 5000m title in a Championship record of 14min 46.12sec in a race that will always be remembered for the calamitous misjudgement of Israel’s 10,000 champion Lonah Salpeter, who began celebrating silver after sprinting through the line with the Dutch athlete before realising she had another 400 metres left to go.

As the startled Kenyan-born athlete veered back towards the inside lane to re-start her race she was passed by Britain’s Eilish McColgan, who had led for two thirds of the race and who went on to win silver in 14:53.05, with Turkey’s defending champion Yasemin Can also moving through to take bronze in 14:57.63.

A shattered Salpeter still managed to make it round once more, and even set a national record of 15:01.00 before collapsing into the infield and receiving immediate attention.

Poland's world and Olympic women's hammer champion Anita Wlodarczyk, who earned a fourth consecutive European title with a Championship record of 78.94 metres. Aleandra Tavernier of France took silver in a national record of 74.78, with bronze going to Poland's Joanna Fiodorow, who recorded 74.00.

Muir added the European outdoor 1500m title to the indoor version she won in Belgrade last year with a superbly assured display that saw her seize the initiative soon after compatriot  Laura Weightman had led through the first lap.

The flying vet had a 15 metres lead entering the final straight and although Poland's Sofia Ennaoui was closing, the gold was never in doubt. This is a serious championship racer. Muir took gold in 4 minutes 02.32 seconds, with Ennaoui claiming silver in 4:03.08 and Weightman being rewarded for her gutsy running with bronze in 4:03.75.

Dina Asher-Smith, already individual 100 and 200 metres champion here completed her set as she anchored home the British 4x100m relay team to gold in 41.88 seconds, the fastest run this season. Silver went to The Netherlands in 42.15, with the home team taking bronze in 42.23.

Britain's men's world champion 4x100m team won in 37.80 seconds, with silver going to Turkey in a national record of 37.98, and The Netherlands taking bronze in 38.03 - also a national record.

A fervently desired home gold was delivered in the women’s 3000m steeplechase by Gesa-Felicitas Krause, who timed her run to the line perfectly to pass the taller figure of Switzerland's Fabienne Schlumpf on the final bend and power home in 9min 19.80sec. The Swiss took silver in 9:22.29 ahead of bronze medallist Karoline Grovdal of Norway, who ran 9:24.46.

Ten years after taking the triple jump title at the Beijing Games, Portugal's 34-year-old Nelson Evora has another major gold thanks to an effort of 17.10m. "Thanks to this wonderful crowd," he said. "This moment was perfect." Silver went to Alexis Copello of Azerbaijan with 16.93, and bronze to Dimitrios Tsiamis with 16.78.