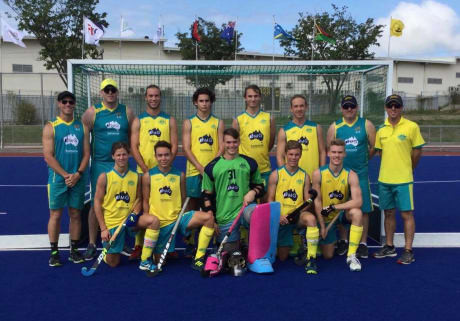 Australia has selected its men and women's hockey teams for the 2018 Summer Youth Olympic Games in Buenos Aires.

They will both feature in a hockey 5s tournament.

The five-a-side rather than traditional 11-a-side version of the game, which is played on a smaller pitch, was a big hit at the last Summer Youth Olympic Games in Nanjing four years ago when Australia's men won the gold medal by winning a penalty shootout against Canada after the match had finished 3-3.

This followed a 2-1 victory over Pakistan for the gold medal at the inaugural Youth Olympic Games at Singapore 2010 when the traditional form of the sport had been held.

"The team going to Buenos Aires is out to defend two previous gold medals, so there is plenty of expectation to do well," 18-year-old Brad Marais said.

"It will be my first time competing against other hockey nations, and I am really looking forward to being able to represent the green and gold."

Brad has been named on the team alongside his younger brother Craig.

The South African-born brothers started playing hockey after they moved to Australia in 2008 and say they have been fortunate to share the journey to Buenos Aires 2018 together.

"The Youth Olympic Games became a goal for me after I competed at the under-21 nationals tournament in 2017," said Brad.

"After that tournament I set my sights on travelling to Argentina with the YOG team and that became my main hockey goal for 2018,” Brad said.

“To play alongside my younger brother, Craig, is a very special occasion.

"We play a lot together for school and club games, as well as at various state tournaments, but to be able to play on the international stage together will be a really cool to experience."

Australia will field a women’s hockey 5s team for the first time at Buenos Aires 2018.

With each National Olympic Committee only able to select one male and one female team for team sports at the Games, Australia's women have previously been represented in handball at Singapore 2010 and rugby sevens at Nanjing 2014.

Both teams qualified for Buenos Aires after winning the regional quilters in Papua New Guinea in May 2018.