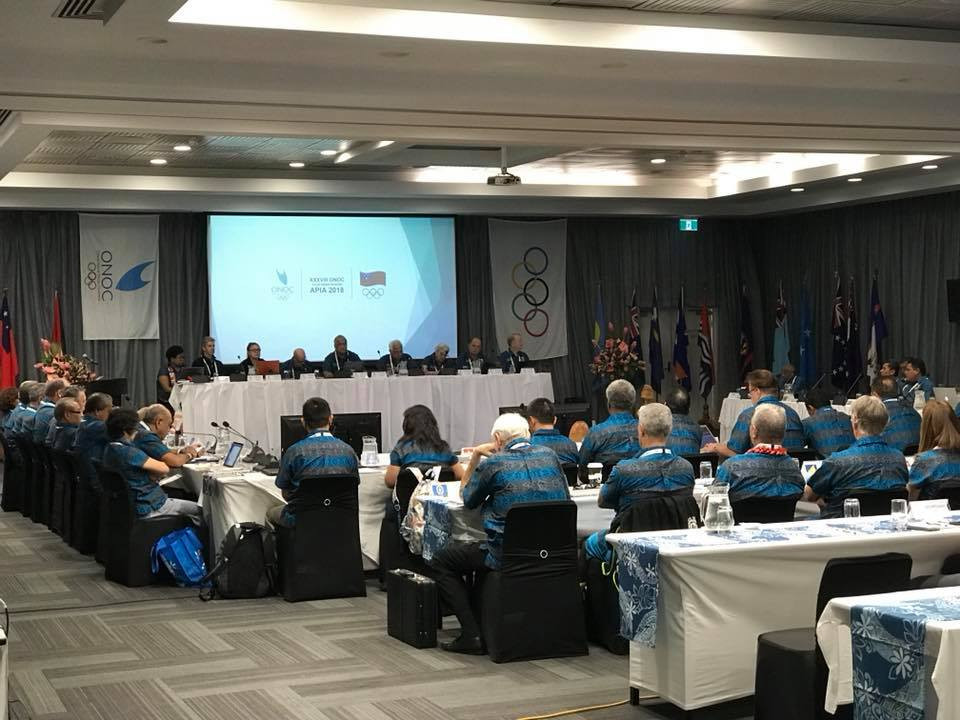 The Assembly, opened by Samoa's Minister of Sport Loau Keneti Sio, proved a streamlined one with proceedings lasting around four hours in Samoa’s capital city.

The format was largely due to their National Olympic Committee and International Federation workshops over the last three days, incorporating key themes in interactive sessions.

Among the key agenda items were the approval of an updated ONOC constitution and the organisation’s strategic plan, with the latter set to run through to 2021.

The documents were largely guided by International Olympic Committee (IOC) members John Coates and Barry Maister respectively, both of whom were unable to attend the meeting due to competing commitments.

The strategic plan sets ONOC’s vision to be of "inspiring success, pride and living the Olympic values".

Among the key goals of the plan will be to build and strengthen NOC capacity, provide training and development for athletes, coaches and administrators, and promote Olympic values.

Cultivating effective regional and global partnerships has also be set as a target, along with contributing towards sporting excellence.

Both the constitution and strategic plan were approved by delegates present.

Olympic Solidarity encouraged NOCs to make the full use of programmes run by the organisation, adding that Oceanian NOCs were not currently using up all the funds dedicated to the region.

It was highlighted that scholarships for athletes were now available for three years, along with career transitions initiatives.

Funding for in the areas of coaching, NOC management, special projects and forums was also asserted to be available.

ONOC also stated the organisation were looking to run a team management programme through their Oceania Sports Education Programme and called upon Chef de Missions for the Tokyo 2020 Olympics to attend.

An update was provided by Tokyo 2020 at the Assembly, along with progress reports on the San Diego 2019 World Beach Games and next month’s Micronesian Games in Yap.

Updates were also provided from ONOC’s athletes, education, medical, women in sport and international relations commissions, as well as the World Anti-Doping Agency and the Oceania Regional Anti-doping Organisation.

The latter will present in greater depth tomorrow, when they hold their General Assembly here as they build towards next year’s Games in Apia.

Mitchell expressed his view that the week had proved successful for ONOC and praised the NOCs engagement with the workshops provided.

"It has been very useful having event organisers here, particularly the Pacific Games and for the first time the Commonwealth Games Federation," he told insidethegames.

"We have also had the Micronesian Games, who are also part of our group.

"It has been good in that sense and the participation throughout the week as been very good.

"The workshops have made our General Assembly tighter, everybody is involved and reports are circulated.

"It has been better structured as we have been looking at consolidating our strategic plan.

"We now have software which feeds out our reports to all of the contributors to ONOC and its work."

ONOC are set to return to Fiji for their General Assembly in 2019, with last year’s event due to take place in the city of Nadi.

Mitchell expressed his belief that holding this year’s meeting in Apia had offered ONOC and Pacific Games Associations with an insight into the work being done by Samoa in preparations for next year’s event.

"Coming here a year before the Pacific Games in Samoa an opportunity to see what we need to do to ensure it is a success," the IOC Executive Board member said.

“It also gives us a chance to see what the local organising committee is planning.

"Federations are here to help them, along with ONOC Commissions.

"Getting the whole family involved has been useful."

Samoa 2019 are set to present their full plans tomorrow, before Chef de Missions take part in a venue tour on Monday (June 18).

Samoa have faced a much shorter build-up than normal for the Games, having only been awarded the event in December as a replacement for Tonga.

A civil suit has been filed by the PGC and the Tonga Association of Sport and National Olympic Committee, with the organisations seeking damages from the Government.