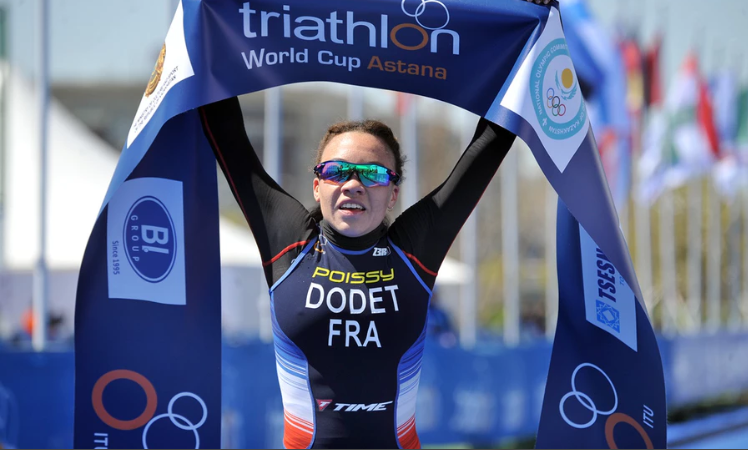 With overnight temperatures dropping, even the glorious sunshine could not help overcome a biting wind, leaving the ITU and the Local Organising Committee with no option but to change the format of the women’s race to a duathlon for the athletes' safety.

That meant a five kilometres run, 40km cycle and 10km run format, leading to some thrillingly tight racing and ending with a heroic final flourish from Dodet.

Out of transition two it was Italy’s Angelica Olmo who assumed the lead with Great Britain’s Lucy Hall and South Africa’s Gillian Sanders exiting side-by-side and hoping to remain in touch.

Soon, though, it was the French trio of Dodet, Justine Guerard and Emilie Morier looking in control as they established a five-deep lead group.

With two laps to go, Dodet lay down the gauntlet and pushed ahead on her own.

Neither Morier nor Olmo could go with her, and with a first World Cup win in her sights, it was the 21-year-old who carved out a 36-second advantage going into the chute and took the tape in 1 hour 57min 14sec.

And it is Dmitry Polyanskiy (RUS) with the gold in Astana! An incredible late burst earns the win, Walkington (AUS) is second, Raphael (FRA) third #AstanaWC pic.twitter.com/1zDZ3MnSEm

Today also saw the new-look ASICS World Triathlon Team come together for the first time following the sports company’s sponsorship of Team ITU at the start of the year.

By the time the men lined up, conditions meant that a sprint swim was possible, and it was ultimately Russia’s Dmitry Polyanskiy who took top honours in 1:36:50 after executing a near-perfect run.

Following transition one, Polyanskiy and his brother Igor were working together well in the saddle, with Australia’s Marcel Walkington and Hungary’s Bence Bicsák also looking comfortable as they powered through the six laps.

Indeed, at the bell, any one of nine athletes looked like they could find their way onto the podium, and it was Germany’s Jonas Schomburg, France’s Aurélien Raphaël and Walkington first out of the final transition.

The Franco-Australian partnership was soon bearing fruit with the pair taking it in turns out front and finding a 10-second lead over Polyanskiy.

But at the final u-turn, with just over a kilometre remaining, Polyanskiy gained ground and galloped up the final stretch to take the tape ahead of Walkington, the runner-up in 1:37:06, and Raphaël, the third-place finisher in 1:37:24.

Today’s races were the first on the ITU World Cup circuit to offer qualifying points for the Tokyo 2020 Olympic Games.

The next leg of the circuit is due to take place in Cagliari in Italy on June 2.